A man holds a dolphin that the group Equinac reported had died in Spain in early August after beachgoers touched and posed for selfies with it.
Equinac
By Rachel Lewis

A baby dolphin beached on the coast of Spain has died after tourists gathered round to pick up and take photographs of the creature.

A non-profit organization called Equinac, which is dedicated to saving stranded and beached sea life, posted on Facebook on Tuesday to say that tourists were not to blame for the dolphin’s stranding, but had nevertheless caused it a large amount of stress by crowding around it. Equinac said that the animal had likely beached itself in Mojácar after becoming sick or separated from its mother, but that tourists should have contacted the charity instead of posing for photos. It added that it arrived within 15 minutes of receiving information of the stranded dolphin, but found it was already dead.

In one picture that the charity re-posted, a child is seen holding the dolphin and accidentally covering the orifice from which it breathes.

“Animals are very susceptible to stress, and their manipulation, to take pictures and touch them, causes them a very strong shock that accelerates, to a large extent, heart failure, which is what finally happened,” Equinac said. “Let us all point out that these animals are highly protected. Harassing, harassing, manipulating and harassing them is prohibited by law, and we always ask for respect and consideration.” 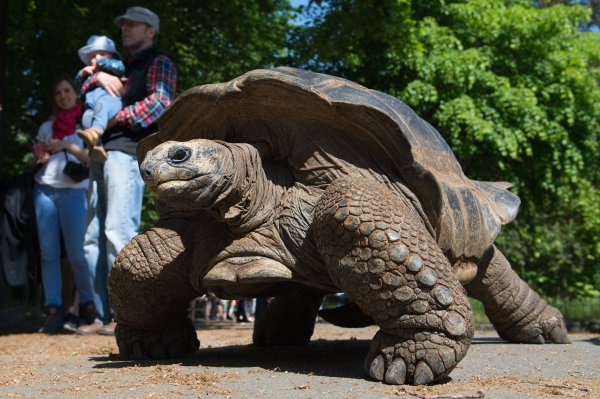 This Giant Escaped Tortoise Evaded Capture for Weeks
Next Up: Editor's Pick