Guam, the U.S. Territory in the Line of North Korea’s ‘Enveloping Fire’

Time, a slippery measure of island life, has taken on a chilling exactitude on Guam. “14 Minutes” ran the front-page headline of a recent edition of the Pacific Daily News. That, the article explained, was how long it would take four missiles launched from North Korea to travel the 2,100 miles to the western Pacific Ocean waters where the U.S. territory lies and create what the Hermit Kingdom’s leader Kim Jong Un described as an “enveloping fire.” Pyongyang’s threat directly defied a promise by U.S. President Donald Trump to respond with “fire and fury” to further North Korean provocations. On Aug. 15, Kim appeared to pause the escalation, saying he would watch U.S. actions “a little more” before ordering a strike on Guam. But the annual U.S. military exercises with South Korea, which Pyongyang vehemently opposes, are due to start on Aug. 21 and could trigger yet more saber rattling–and, perhaps, hostilities.

Until recently, Guam, 210 square miles at the bottom of Micronesia’s Mariana Islands chain, would not have been familiar to many Americans. Few make the 6,000-mile trip across the Pacific to visit the island; its palm-studded beaches and flamingo sunsets lure mostly South Korean and Japanese tourists. But Kim’s threats have made the world pay attention to the island and its 163,000 U.S. citizens.

The American military drives about 30% of Guam’s economy, and U.S. bases occupy a third of the island’s land. Andersen Air Force Base lies to the north, Naval Base Guam and the Joint Region Marianas military command to the south. This was a primary launchpad for the Vietnam War and where, on Aug. 7, seven B-1B bombers took off to fly sorties over the Korean Peninsula. Guam is the Asian spear tip of the world’s biggest military, and consequently a natural target.

Guam has been a colony since the 17th century–ruled first by the Spanish, then the Americans, then the Imperial Japanese during World War II, then the Americans again. A calypso-like wartime ditty urging the latter’s return indicates the warmth the indigenous Chamorro people then felt. “Sam, my dear Uncle Sam, would you please come back to Guam,” it goes. “I don’t like sake, I like Canadian [whiskey]/ I don’t like the Japanese, I love American.”

Not everyone feels that warmth today. Lisalinda Natividad, an assistant professor at the University of Guam, says that Liberation Day, which marks the U.S. defeat of the Japanese every July 21, is “about reoccupation.” Although Guam’s military enlistment rate is higher than that of any U.S. state, Natividad says it speaks to a lack of options. More than a third of islanders qualify for food stamps. At the Pay-Less supermarket downtown, a half-gallon of milk costs about $7; on base, it’s the same price for a gallon.

What’s more, Micronesia has often paid the price for the American military presence. From 1946 to 1958, the U.S. tested 67 nuclear weapons in the nearby Marshall Islands, including the devastating Castle Bravo test at Bikini Atoll. In his book What We Bury at Night, Guamanian human-rights attorney Julian Aguon chronicled how irradiated Marshallese mothers had borne “jellyfish babies” with translucent skin and no bones. Now Chamorro people are in the firing line because of U.S. projections of power, says Aguon. “[Guam is] a photograph of the gulf between the ones who make the decisions and the ones who suffer the consequences of those decisions,” he says.

On the day of the “14 Minutes” headline, Guam’s government issued a two-page fact sheet titled “In Case of Emergency: Preparing for an Imminent Missile Threat.” Among the advice it gives residents affected by fallout: Avoid using conditioner “because it will bind radioactive material to your hair.” Ana Aguon, an islander, says she read the fact sheet but worries that if a bomb comes at night, there won’t be time to heed its advice. “I told my kids, ‘Just make sure you’ve got snacks so that whenever they tell us to evacuate, you just grab your backpack and move,'” she says.

On Aug. 12, Trump called Guam Governor Eddie Calvo. He assured Calvo that he was “1,000%” behind him and suggested he enjoy the attention. Tourism, the President said, is “going to go up, like, tenfold with the expenditure of no money.” Some, however, caught an unusual note in Trump’s phrasing. He called Calvo, Trump said several times, “to pay [his] respects.” For two men just shooting the breeze, it was an oddly funereal phrase. 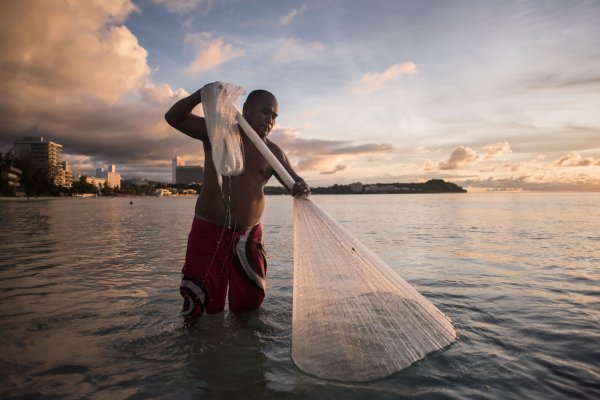 Life on Guam, the Island Caught Between Trump and Kim
Next Up: Editor's Pick