Inside the Push for More Public Statues of Notable Women

A woman walks toward the statue of Dianne Feinstein at City Hall in San Francisco, on In this June 26, 2017.
Jeff Chiu—AP
By Maya Rhodan

Kanishka Karunaratne jogs by Golden Gate Park regularly, but until recently she never paid much attention to its monuments.

During a January event aimed at mobilizing young women to run for political office, Karunaratne heard an interesting factoid from former U.S. Treasurer Rosie Rios: The only women among Central Park’s statues are Alice in Wonderland, Shakespeare’s Juliet and Mother Goose.

Karunaratne, a legislative aide for San Francisco’s Board of Supervisors, decided to look into the park near her home, and was shocked to find it fared even worse. The only female figure there is the “Pioneer Mother,” who symbolizes the matriarchs who moved west along the Oregon and California trails. And across the 87 statues in the entire city, only former Mayor and U.S. Sen. Dianne Feinstein and Florence Nightingale are represented.

“In San Francisco, where we think of ourselves as this inclusive, liberal bastion of a city, even we’re not doing well,” she says.

Along with a colleague, Margaux Kelly, Karunaratne set out to change that. Supervisor Mark Farrell recently introduced a resolution they inspired that would affirm the city’s commitment to increasing female representation across the public sphere to 30% by 2020. If the legislation passes, the city would become the first in the U.S. to sign on to an international movement with the same 30% goal.

The first project is an effort to erect a statue at the city’s main library of the late poet and civil rights activist Maya Angelou, who has deep roots in San Francisco. The statue would cost about $500,000. The legislation would also create a fund for projects like the Angelou statue.

It’s a fraught moment for the politics of statues in America. After a protest over the impending removal of a statue of Robert E. Lee in Charlottesville, Virginia, turned violent, leaving one counterprotester dead, many cities across the country are considering taking down similar Confederate memorials.

But efforts like San Francisco’s are aimed at the other side of the debate, increasing representation of people who have been left out and breaking through what might be called the bronze ceiling.

A recent search of female historical figures among the Smithsonian American Art Museum art inventories catalog turned up 555 outdoor sculptures, about 9% of the over 6,900 recorded works. Among the work listed are allegorical like “Self Denial” at the New Haven County Courthouse, “Inner Light” in Silver Spring, Md., and, of course, the Statue of Liberty. A grand total of nine national park sites are dedicated to women’s history—out of 411.

Women make up just 20% of the U.S. Congress, 20% of mayors, 24% of statewide elected executive offices, and make up just 5% of the c suite. Joan Bradley Wages, the president and CEO of the National Women’s History Museum says that not sharing women’s historical contributions sends a message to young girls and young boys that women do not play a prominent role in shaping the U.S.

“By having women missing, it sends the message to young girls and young boys that women did not play a prominent role in the building and the growing of our nation,” she says. “It’s as though women did not participate and they do not deserve the respect that men do who are portrayed across the country.”

The lack of monuments representing women has been the focus of many for decades and progress has been incremental, to say the least. A nine-year push led to the dedication of the Vietnam Women’s Memorial in Washington in 1993. As a result of a 2000 law that allowed states to replace their representative statues in the U.S. Capitol’s Statuary Hall, Alabama placed a statue of Helen Keller on display in 2009. In 2013, a statue of Civil Rights icon Rosa Parks was unveiled in a ceremony led by President Obama. But in some of the nation’s largest cities, New York, Los Angeles, Chicago—there are still just a few statues depicting real women.

Like San Francisco, other cities are working to change that. In Washington, D.C., where most of the statues depicting women are mythical, like the “Future” statue at the National Archives (there are a few historical statues, including Mary McLeod Bethune in Northeast) Council-member Kenyan McDuffie introduced legislation in June to erect a statue of a woman and/or person of color in each of the city’s eight wards. In November of 2016, New York Life launched a $500,000 challenge grant—when people donate money, the company will match until they reach the goal—to get statue of suffragists Elizabeth Cady Stanton and Susan B. Anthony erected in Central Park.

“Central Park is visited by so many people and it’s such an iconic place in New York City,” says Heather Nesle, president of the New York Life Foundation. “To really see folks who were putting themselves on the line, doing all of this work, which was pretty radical at the time, can be inspiring to younger generations even to some of us who aren’t so young. To show that there are ways of effecting change that lead to really positive results.”

Bradley Wages agreed, arguing that statues are important for the signal they send.

Changing the existing narrative around women in U.S. history become a focus of former Treasurer Rios, who led the effort to put a woman on the face of U.S. currency for the first time in a century. Since leaving Treasury, she’s made it her life’s mission to shift what she calls the U.S.’s consciousness, first, by educating people about gender disparities and then challenging them to do something about it.

“We know that our daughters are capable of anything, right?” Rios said in a recent TedX talk. “But they need inspiration in order to have aspirations.”

Through her Empowerment 2020 initiative, Rios is working to boost female representation in all areas of decision-making but also educate and inspire the next generation of leaders. Statues and portraits, of course, are hardly the only way we learn history, which is why Rios—who gave the speech on Central Park statues that inspired Karunaratne—launched the Teachers Righting History Project, which gets students and educators to include more stories of historical women in everyday learning. She’s also working with lawmakers and organizations like the National Women’s History Museum across the U.S. to recognize women in the public domain—via statues and otherwise. On Aug. 26, she’s co-hosting a conference with the city of San Francisco that will bring together educators, students, business and tech leaders to advance all of these efforts.

“If we don’t do anything we’re literally affecting the future of half the population from early on,” Rios told TIME recently. The movement to increase women’s representation is about more than just erecting a few statues. It’s about sending a message to young boys and young girls that half of the population had a hand in shaping the nation’s history.

“Our goal is not just statues,” says Karunaratne. “But also building names and park names and street names so that we start to get comfortable and familiar with women’s names as much as we are with men’s names and recognize that they are of equal importance.” 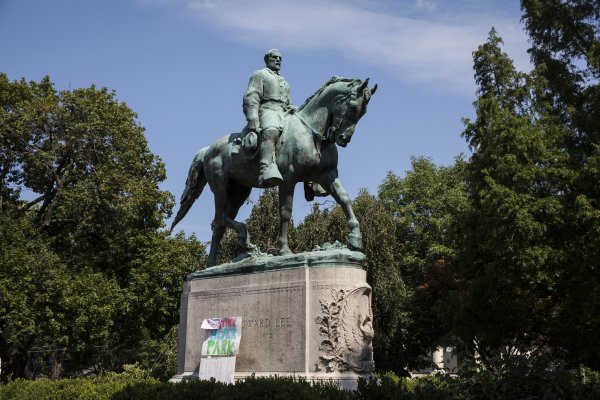 Removing Confederate Monuments Doesn't 'Erase' History. It Fact-Checks It
Next Up: Editor's Pick