By Zachary Tracer and Sabrina Willmer and Hugh Son / Bloomberg

Only a day after Donald Trump labeled the growing number of CEOs quitting his business council “grandstanders” who, in some cases, were hurting ordinary Americans, the president tweeted that he would abolish the advisory groups rather than put pressure on executives to stay.

His announcement came within an hour of reports that one of the groups — a forum of top finance and business executives — was planning to disband. It appeared to be an effort by Trump to get ahead of the business leaders who were abandoning him a day after he equated neo-Nazis to counter-protesters at a New York City press conference.

It’s a stunning rebuke for the first CEO president, who pitched himself as a savvy businessman who would slash taxes and regulations to unleash growth by U.S. companies. Markets largely ignored the move, however, and the Standard & Poor’s 500 Index was up less than 1 percent as of 3:24 p.m.

At a press conference Tuesday, Trump said he would replace those who quit his council of manufacturing executives. He bid good riddance to one CEO — Merck & Co.’s Kenneth Frazier — who was first to resign. He then went on to talk about race relations and the violence in Virginia, placing partial blame on demonstrators protesting a gathering of white supremacists in Charlottesville. A woman was killed during the event after a man rammed a car into a crowd.

The evening after Trump’s comments, members of the strategy and policy forum — led by Blackstone Group LP’s Stephen Schwarzman — began to waver. BlackRock Inc. CEO Larry Fink called some of his firm’s clients and said he planned to resign from the forum, according to a person familiar with the matter. The next morning, he told Schwarzman he was out.

On a conference call late Wednesday morning with members of the strategy forum, the group was polled to ask who would stay. Of the dozen executives on the call, 10 voted to leave, according to another person familiar with the event. The group planned to tell the White House about their decision before making it public, according to a third person.

In a memo sent to BlackRock employees and provided to Bloomberg Wednesday, Fink said that the violence, racism and antisemitism in Virginia had to be criticized without caveats.

“While I have disagreed with the president in certain instances this year, I continued to participate in the forum because I believed it was important to have a voice at the table for investors, including our clients,” Fink wrote. “Unfortunately, after the last few days, I concluded that I could no longer in good conscience participate in the forum.”

“The events that occurred in Charlottesville, as I said on Monday, are nothing short of domestic terrorism. Such racism and bigotry must not just be condemned, but must be condemned unequivocally,” he said.

The strategy group is one of several the White House convened earlier this year to advise the president, though it and the manufacturing panel haven’t met recently.

Jamie Dimon, the JPMorgan Chase & Co. CEO, was also a member of the strategy council and said he supported the breakup.

“It is a leader’s role, in business or government, to bring people together, not tear them apart,” he said in a memo to employees provided to Bloomberg.

The strategy and policy forum said the controversy over Trump’s remarks about the Virginia violence led to the decision. “The debate over forum participation has become a distraction from our well-intentioned and sincere desire to aid vital policy discussions on how to improve the lives of everyday Americans.”

Several CEOs from a manufacturing council quit before Wednesday, including the CEOs of Under Armour Inc. and Intel Corp. Before Trump’s announcement, Inge Thulin, CEO of 3M left, as did Campbell Soup CEO Denise Morrison.

“Following yesterday’s remarks from the president, I cannot remain on the Manufacturing Jobs Initiative,” Morrison said in a statement. “I will continue to support all efforts to spur economic growth and advocate for the values that have always made America great.”

The dispute over the panels began on Monday, when Merck’s CEO Frazier took a public stand against Trump, saying that quitting the manufacturing council was “matter of personal conscience” and said that U.S. leaders had to reject “hatred, bigotry and group supremacy.”

In the past several days, other executives have echoed those sentiments.

General Electric Co.’s Jeffrey Immelt, one of the biggest names in American manufacturing, said soon after Trump’s tweet that he too planned to step down from the now-disbanded group, reversing a decision from two days prior. Immelt, who notified council members earlier in the day, said Trump’s comments at the Tuesday press conference “were deeply troubling.”

The disbanding of the councils doesn’t mean corporate America will fully turn its back on Trump, said Dan Eaton, a business ethics lecturer at San Diego State University. Businesses are still hoping that the administration can move ahead with corporate tax reform and infrastructure spending.

“It was personal, not necessarily policy related,” Eaton said of CEOs. “They are going to continue support the agenda of the president and congressional leaders when it serves corporate America’s purpose.” 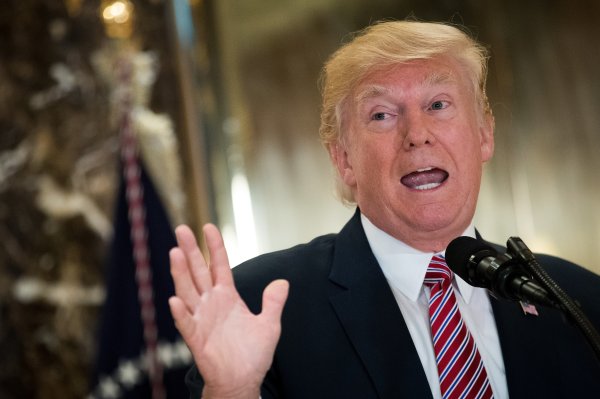