How President Trump Failed His Biggest Leadership Test Yet

For seven months, President Donald Trump giddily has ignored the norms of his office and tried the patience of those who had more than a passing knowledge of its history.

But during Tuesday’s press conference, before the gold-plated bank of elevators inside his Midtown temple to himself, the President defended those linked to white nationalists, neo-Nazis and other racist corners of American society in a display that defied any historical precedent. So striking was his bold protection of a small but vocal part of his political base, many reporters in the marble foyer dared to interrupt the President. If he was breaking with custom, so, too, would they.

“If you look, they were people protesting very quietly the taking down of the statue of Robert E. Lee,” Trump said of the Friday night march around the University of Virginia campus. That torch-lit procession featured white nationalists chanting “blood and soil” and “Jews will not replace us.”

Presidents can make war, but the truest test of a commander in chief is his power to heal: Standing on burning rubble in Lower Manhattan or visiting a mosque a few days later, addressing an auditorium to memorialize those killed in coal mines or by a gunman in an elementary school classroom. A president’s words have the capacity to console a nation in grief, settle its collective fears, and call its people to action.

That was the task before Trump as he spoke for the third time since the events in Charlottesville. His first brief remarks, in which he blamed “many sides” for the violence, were heavily criticized. In heavily scripted remarks on Monday, he said all the right words, though he seemed to resent the effort. And finally, at home in Manhattan for the first time since he became president, Trump cut loose.

Still smarting from Monday’s forced statement condemning neo-Nazis, Klansmen and white supremacists, Trump shoved a finger into the gaping wound of race relations in America. The President repeated his assertion that there is “blame on both sides” of the violence.

If the President was looking to win praise from both-sides, he failed. For the second time in a week, a bipartisan parade of lawmakers lined up to scold the president. The loudest cheerleader of his statement was none other than David Duke, saying this was what the President truly felt in his heart. Others on the alt-right, racist and bigoted fringes of the Republican Party cheered, even as its elders watched, yet again, as their brand went into yet another tailspin of Trump’s making.

The press conference followed a presidential statement on infrastructure where aides had hoped he would not take questions. But Trump, still frustrated by critics in both parties who condemned his tepid response to the unrest Saturday, came ready to brawl. In his breast pocket he carried a copy of his initial remarks. “We condemn in the strongest possible terms this egregious display of hatred, bigotry and violence,” Trump read, leaving off his phrase that provoked so much consternation hours after a white supremacist allegedly rammed his car into a group of counter-demonstrators: “on many sides.”

Explaining his delayed condemnation of racist groups, Trump said he was waiting for more information at the time. “When I make a statement, I like to be correct. I want the facts,” he said. Republicans throughout Washington chortled at that, given Trump’s years of planting false seeds that President Obama was born in Kenya, that millions of people voted illegally during the last election and any number of incomplete statements about his own campaign’s interactions with Russian officials.

Yet the motivation of those fighting in the Virginia streets was clear as day—and Trump’s own fidelity to the facts appears increasingly to be a unicolor endeavor. His administration has rushed to condemn terror attacks and acts of violence perpetrated by racial and religious minorities, but have slow-walked those in which they are victimized. He still has not commented on an Aug. 5 attack on a mosque in Minnesota.

It was not without merit to note that the counter-protestors turned violent as well, but in painting with such a broad brush Trump suggested moral equivalency—between those preaching racial supremacy and those upholding the national ideals of pluralism.

“You’re changing history. You’re changing culture,” Trump said of those looking to remove town statues of Confederate generals and slave owners, some to museums where more context about their place in history could be explored. Trump mockingly suggested that George Washington and Thomas Jefferson—founders and slaveholders alike—would be next. In doing so, he washed over the painful debate spanning the country over the competing virtues of reckoning and acceptance.

It was a sobering reminder of the forces that propelled Donald Trump to the White House in a campaign rooted on exploiting fears and feelings of dislocation, but also a sign of how, in the end, it was still about Trump.

As he walked away from the cameras, Trump, who acknowledged he had yet to speak with the family of the woman killed Saturday, Heather Heyer, was asked if he intends to visit Charlottesville soon. “Do you know I own a house in Charlottesville?” he responded to reporters. “I own actually one of the largest wineries in the United States, that’s in Charlottesville.” 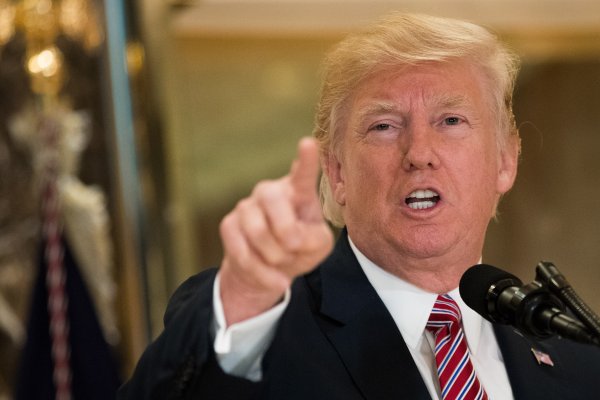 President Trump Again Blames 'Both Sides' for Charlottesville Violence
Next Up: Editor's Pick