President Donald Trump’s latest remarks about the clashes in Charlottesville, Va., drew praise on Tuesday from white supremacists after Trump said “both sides” were to blame for the violence.

“Thank you President Trump for your honesty & courage to tell the truth about #Charlottesville & condemn the leftist terrorists in BLM/Antifa,” former Ku Klux Klan leader David Duke wrote on Twitter.

Trump on Tuesday described anti-racism protesters as the “alt-left” and said “there’s blame on both sides.” “You had a group on one side that was bad, and you had a group on the other side that was also very violent, and nobody wants to say that, but I’ll say it right now,” Trump said Tuesday in a press conference at Trump Tower.

On Monday, Trump condemned white supremacists and called racism “evil.” But that response — which came nearly 48 hours after the violence in Charlottesville — was dismissed by many white supremacists. “He sounded like a Sunday school teacher. I just don’t take him seriously,” white nationalist Richard Spencer told reporters on Monday, according to HuffPost. “It sounded so hollow and vapid.”

Spencer praised Trump’s comments on Tuesday. “Trump’s statement was fair and down to earth. #Charlottesville could have been peaceful, if police did its job,” Spencer said on Twitter, adding: “I’m proud of him for speaking the truth.”

Eli Mosley, one of the organizers of the white supremacist rally in Charlottesville, told a HuffPost reporter that he felt Trump’s remarks showed he was supporting them.

“The madman President Trump was on the campaign has returned. He has returned, and he is out — he is going on offense. Everybody knows it. Everybody knows how the information environment just changed,” said alt-right activist Jack Posobiec, known for promoting the false “Pizzagate” conspiracy theory. “Take a bow. Take a bow, President Trump, because you just earned it.”

“We must be clear. White supremacy is repulsive,” Republican House Speaker Paul Ryan said on Twitter. “This bigotry is counter to all this country stands for. There can be no moral ambiguity.” 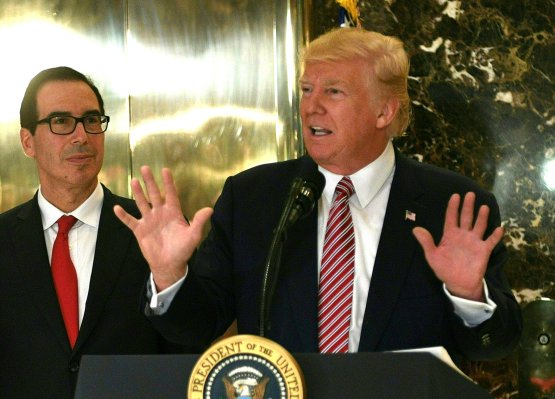 Read the Transcript of President Trump's 'Blame on Both Sides' Comments on Charlottesville
Next Up: Editor's Pick