President Donald Trump said Tuesday that anti-racism protesters who he called the “alt-left” bear some of the blame for the violent rallies in Charlottesville, Va., returning to his original comments that “many sides” were responsible for the deadly clashes in which a man believed to be a white supremacist drove his car into a crowd of anti-racism protesters.

“What about the alt-left that came charging at the — as you say — the alt-right? Do they have any semblance of guilt?” Trump said Tuesday afternoon during a press conference in the lobby of Trump Tower.

Politicians of all parties criticized Trump’s initial statement on Saturday’s violence, in which he also blamed both sides — white supremacists, including some with Nazi flags, as well as anti-racism protesters. On Monday, Trump condemned the violent attack on a crowd of counter protesters that killed a 32-year-old woman and injured 19 others, saying “racism is evil.” But with his Tuesday press conference, ostensibly about infrastructure, Trump returned to his widely panned “both sides” approach.

The park — where white supremacist groups had gathered to protest the removal of a statue of Confederate Gen. Robert E. Lee — was renamed Emancipation Park in June.

“Are we going to take down statues to George Washington? How about Thomas Jefferson?” Trump said, identifying both former presidents as slave owners. “You know what? It’s fine. You’re changing history, you’re changing culture. And you had people — and I’m not talking about the neo-Nazis and the white nationalists because they should be condemned totally — but you had many people in that group other than neo-Nazis and white nationalists, and the press has treated them very unfairly.”

Asked, as he was leaving, whether he plans to visit Charlottesville, Trump made reference only to his winery in the city and called Charlottesville a “great place.”

“I own actually one of the largest wineries in the United States,” he said. “It’s in Charlottesville.” 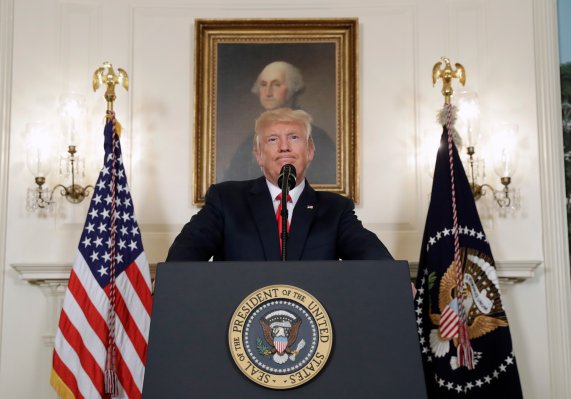