Visitors participate in a candlelight vigil on the 40th anniversary of the death of Elvis Presley at Graceland in Memphis, Tenn. on Aug. 15, 2017,
Brandon Dill—AP
By Melissa Chan

President Donald Trump once again said “both sides” are at fault for the violence that occurred at a white supremacist rally in Charlottesville, Va. In a news conference, the President lashed out at what he called the “alt-left,” using a tone starkly different from his Monday explicit condemnation of racism and white supremacists. His new remarks drew praise from white nationalists and ire from Democrats and many Republican leaders.

Baltimore took down and hauled away four of its Confederate statues overnight. Earlier this week, the Maryland city voted to remove the figures after the deadly white supremacist rally in Virginia that started over a Robert E. Lee monument. “It’s done,” Mayor Catherine Pugh said, according to the Baltimore Sun. “They needed to come down.”

Millions of Elvis Presley fans around the world today are remembering the legendary singer on the 40th anniversary of his death. Thousands of people, including Presley’s wife and daughter, gathered at a vigil for the king of rock and roll at Graceland, according to the Associated Press. Meanwhile, there are still some people who think he’s alive. Here’s why.

The Lincoln Memorial in Washington, D.C., has been vandalized with red graffiti.

Luther Strange and Roy Moore will head to a GOP runoff in an Alabama Senate race. 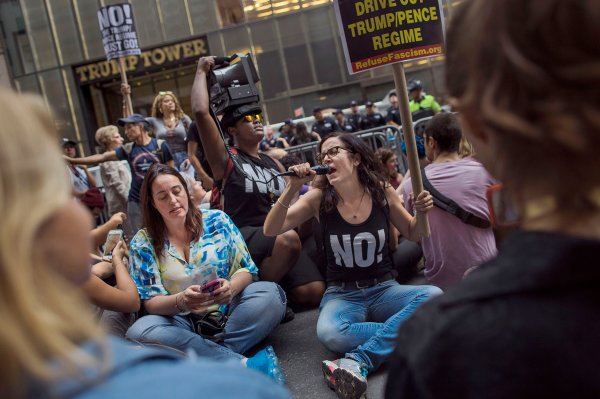 The Morning Brief: White Supremacy, Iran and Taylor Swift
Next Up: Editor's Pick