The tragic events in Charlottesville have dominated news, and late night television’s hosts each had their own ways to respond to the latest strife riling the U.S.

Jimmy Fallon hosted British actor Riz Ahmed of The Night Of and Rogue One fame, but Ahmed has another talent: he’s one half of the rap group Swet Shop Boys, and shared one of his own songs for the studio audience.

“I wrote this piece ten years ago, and every year I keep hoping it will become irrelevant, but it keeps becoming more and more relevant, sadly,” he told Fallon before launching into a minimalist spoken-word version of the track. “In these sour times, please allow me to vouch for mine. Bitter taste in my mouth, spit it out with a rhyme. I’m losing my religion to tomorrow’s headlines.”

Stephen Colbert, meanwhile, decided to take President Trump to task. “It is difficult to express how heartbreaking it is to see something like this happening in our country,” he admitted in his introductory monologue. “But here’s something that’s not difficult to express: Nazis are bad. The KKK? I’m not a fan. That wasn’t hard. That was easy.”

Colbert then called out Trump for his delayed condemnation of hate groups. “If only the president was as mad about neo-Nazis murdering people on the streets as he’s been about Hillary Clinton, the New York Times, CNN, Joe Scarborough, Kristen Stewart, the cast of Hamilton, Diet Coke, Nordstrom’s not selling his daughter’s clothes, Arnold Schwarzenegger, the mayor of London Sadiq Khan, me, the state of New Hampshire, gold star families, Penn Jillette’s Las Vegas show, the movie Django Unchained, Meryl Streep, and lady Ghostbusters,” he listed.

And Jimmy Kimmel? He laid into Trump for his vague response as well, in which the president condemned actions on “many sides.”

“There were two sides, not ‘many sides,'” Kimmel said. “And one of those sides had Nazis on it. All he had to do was condemn the Nazis. It shouldn’t have been a difficult thing. It’s not exactly a controversial stance. Not like we asked him to come out against puppies or something.” He then added: “If there’s any silver lining to this — and there isn’t — it’s that whatever vacation he was hoping to have, it’s now ruined.”

Fallon, Kimmel, and Colbert compete against one another in a race for ratings and viewers, but on this subject, they all certainly have found common ground. 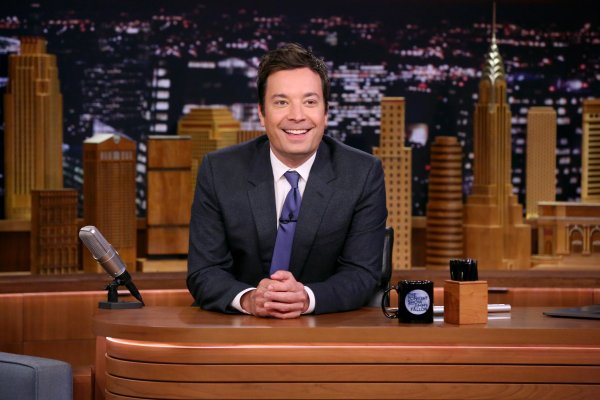 Jimmy Fallon Calls Out President Trump Over His Charlottesville Response
Next Up: Editor's Pick