10,000 Gallons of Tainted Alcohol Were Seized From Mexican Resorts

Government officials took the potentially tainted alcohol, citing the company’s “bad manufacturing practices,” according to a report from the Milwaukee Journal Sentinel, which opened an investigation into how travelers to upscale resorts near Cancun and Playa del Carmen have been blacking out after drinking small amounts of alcohol last month. Regulators, who did not release the company’s name, raided 31 resorts, nightclubs and restaurants in the area.

Officials shut down operations at two bars, including one at the resort Iberostar Paraiso Maya, located in the complex where a 20-year-old Wisconsin woman was found unconscious in a pool in January. Abbey Conner, who was on vacation with her family at the time, drowned after drinking with her brother at the resort’s lobby bar. She was declared brain dead after being flown back to Florida.

“There is obviously stuff going on that needs to be cleaned up or looked into further,” Ginny McGowan, Conner’s mother, told the Sentinel.

According to the Sentinel, Conner and her brother’s blood levels were three times over the limit that Wisconsin law considers to be impaired, even though they had only spent about two hours at the resort. A number of other people reported similar experiences to the Sentinel.

A 2017 report from Euromonitor International said up to 36% of alcohol consumed in Mexico is illegal. The alcohol seized from Kukulkan, the bar at Iberostar Paraiso Maya, was expired and unlabeled and kept in unsanitary conditions, according to the Sentinel.

In a statement, a spokesperson for the Ibersotar Hotels & Resorts said: “It is important to clarify that the closure of this one bar was the result of sanitary compliance (for instance a trash container lid missing, leak from ice machine, etc.), not related to tainted alcohol allegations. We are diligently working to resolve the issues pointed by the inspector and expect another evaluation within the next several days so that this bar’s operations can be fully restored.”

Authorities also temporarily shut down Fat Tuesday, a bar located in Cancun, and took a total of 90 gallons of alcohol from both bars.

The U.S. State Department warned travelers about potential tainted or counterfeit alcohol in Mexico in July, following the Sentinel‘s investigation.

Correction: The original version of this story misstated where Abbey Conner died. She was declared dead in the United States, not in Mexico. 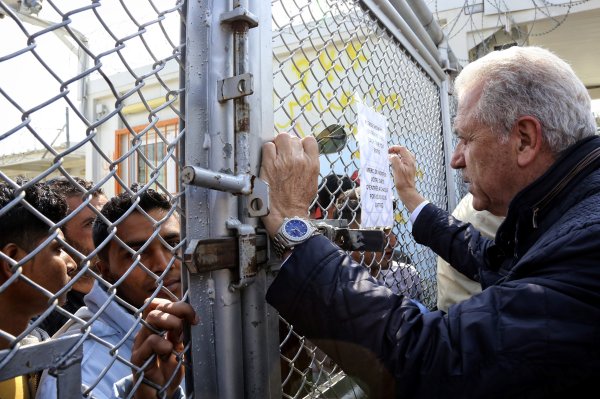 Migrants on Greek Islands Are Trapped, Desperate: Report
Next Up: Editor's Pick