Jimmy Fallon Calls Out President Trump Over His Charlottesville Response

Jimmy Fallon departed from The Tonight Show‘s traditional joke-laden monologue Monday night to take two minutes to reflect on what he called the “disgusting” events that happened in Charlottesville last weekend.

“Even though the ‘Tonight Show’ isn’t a political show,” Fallon opened, “it’s my responsibility to stand up against intolerance and extremism as a human being.”

He described the weekend’s events as “disgusting” and said the “Nazi flags, and torches, and white supremacists” made him “sick to my stomach.”

Fallon then spoke directly about President Donald Trump. “The fact that it took the President two days to come out and clearly denounce racists and white supremacists is shameful,” he said. “I think he finally spoke out because people everywhere stood up and said something… Ignoring it is just as bad as supporting it.”

He also paid tribute to 32-year-old protestor Heather Heyer, who died after a car rammed into protestors.

The presenter faced backlash for a September interview with Trump, in which they joke and Fallon tussles the President’s hair. “They have a right to be mad,” Fallon told the New York Times in May. “If I let anyone down, it hurt my feelings that they didn’t like it. I got it.”

Fallon has previously been criticized for the apolitical stance of The Tonight Show, the New York Times reported in March that ratings had dropped against the more political The Late Show, hosted by Stephen Colbert. 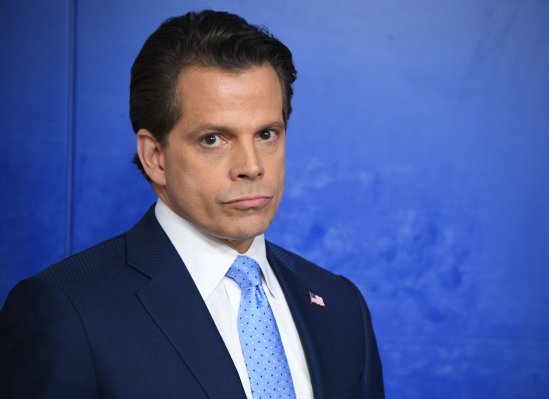 Watch Anthony Scaramucci on The Late Show With Stephen Colbert
Next Up: Editor's Pick