Half a Million People in Yemen Had Cholera in 2017. That's the Worst Outbreak Ever Recorded in a Single Year

A Yemeni child suspected of being infected with cholera is checked by a doctor at a makeshift hospital operated by Doctors Without Borders in Yemen's Hajjah province on July 16, 2017.
Stringer—AFP/Getty Images
By Feliz Solomon

More than half a million people in Yemen are believed to have been infected with cholera since the start of this year amid the worst outbreak of the deadly water-borne disease ever recorded in a single year.

The World Health Organization said Monday that the total number of suspected cases has exceeded 500,000, and more than 2,000 people have died since the epidemic rapidly began to spread in April. While the overall nationwide caseload has slowed since early July, infections are still occurring at the alarming rate of about 5,000 people per day.

Deteriorating sanitation and hygiene conditions in the war-torn country, as well as chronic disruptions to water supply, have allowed for the rapid spread of disease. Yemen’s crumbling health system is also overwhelmed by the scale of the epidemic; according to WHO, some 30,000 critical health providers have not been paid salaries for almost year.

“Yemen’s health workers are operating in impossible conditions. Thousands of people are sick, but there are not enough hospitals, not enough medicines, not enough clean water,” WHO Director-General Dr. Tedros Adhanom Ghebreyesus said in a statement. “To save lives in Yemen today we must support the health system, especially the health workers.”

Read More: What to Know About the Massive Cholera Outbreak in Yemen

Katy Wright, the head of advocacy for Oxfam, called on the international community to help seek solutions to Yemen’s political crisis, and to stop financial and military backing linked to the conflict in order to resolve what is quickly becoming one of the world’s most urgent humanitarian crises. According to the U.N., almost two-thirds of the country’s population are now reliant on some form of aid.

“This is no accidental disaster — it is a manmade disaster driven by national and international politics. All those fighting and backing this war need to stop fueling the madness and instead come to the peace table for the sake of civilian families in Yemen,” Wright said. “In backing this war with billions of dollars of arms sales and military support the U.S. and the U.K. are complicit in the suffering of millions of people in Yemen.” 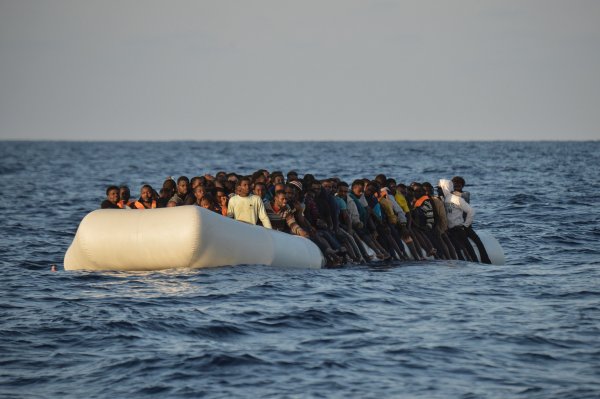