How the Nazi Flags in Charlottesville Look to a German

As we watched the news stream in from Charlottesville over the weekend, it wasn’t the violence that shocked my fiancée the most. She was born and raised in Germany, a nation whose citizens are all too familiar with Nazism and terrorism. Nor did her face go slack with disbelief at the footage of right-wing militiamen marching through the streets of Charlottesville with automatic weapons. What got to her was the Nazi flag, which at least one of the demonstrators carried openly in the streets. “How is that even legal?” she asked me.

It wouldn’t be in Germany. Soon after the end of World War II, the Germans banned swastikas and other Nazi emblems, and the German people, not to mention the police, do not tend to react well when the symbols of that era are put on display. Hours before the clashing demonstrations started in Charlottesville on Saturday, an American tourist in the German city of Dresden got punched in the face by a local for drunkenly throwing the Hitler salute. Less than two weeks earlier, two Chinese tourists in Berlin made the same gesture while taking a photo in front of the Reichstag; they were promptly arrested and could face a fine or up to three years in prison.

That’s not to say Germany has fully rid itself of homegrown fascism; according to research by the Anti-Defamation League, a U.S.-based advocacy group for civil rights, some 16% of Germans are still “infected with extensive anti-Semitism,” and slightly more than half of them believe that Jews talk about the Holocaust too much. But as a nation, Germany has reckoned with the evils (and the symbols) of its past much more honestly and thoroughly than the U.S. has done with the history of slavery, for instance, or the atrocities committed against Native Americans.

Even the leadership of the far-right party in Germany, Alternative für Deutschland, or AfD, tends to denounce racist violence and expressions of fascism a lot faster and more compellingly than President Donald Trump did after the bloodshed and the hate seen in Charlottesville. They do so not because they are tolerant – the AfD is not tolerant at all, especially when it comes to immigration from the Muslim world – but because they know that remaining silent in the face of Nazism is not a path to success in German politics.

Like President Trump, they are populists. They cater to the baser instincts of their respective voters. And the difference between them lies not in their political styles but in the limits set for them by their supporters and their national laws. While large groups of U.S. voters support Trump despite his Administration downplaying or even pandering to the extreme right, the vast majority of German voters tend to reject such appeasement of bigotry as a sign of history repeating. And if U.S. law allows people to display the iconography of hate, German law does not.

Though it felt somehow inadequate, this was the best answer I could give to my fiancé’s question: The First Amendment protects the right of an American to carry a Nazi flag. “And what about the Ku Klux Klan?” she asked. “People can’t swim naked on a public beach in California. But the KKK is allowed to march around in their uniforms?”

She had not yet seen any images of the KKK in Charlottesville doing exactly that. And when I showed them to her, she shook her head and asked another question, this one rhetorical: “Is that what Trump meant by making America great?” 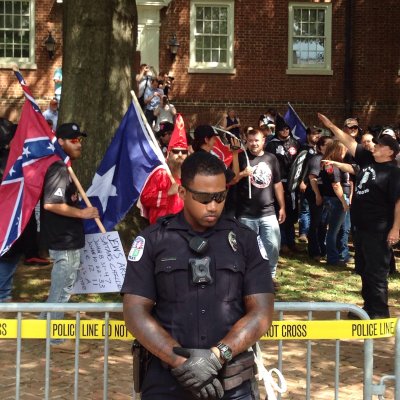 The Story Behind the Viral Photo of the Officer and the KKK
Next Up: Editor's Pick