When white supremacist Dylann Roof shot and killed nine African American parishioners in a Charleston church, communities quickly called for the removal of public commemorations to the Confederacy. Cities across the country agreed, taking down flags and removing statues that honored generals such as Robert E. Lee.

The violent protest in Charlottesville, Virginia, appears to have spurred similar action.

After a statue was vandalized in Louisville, Kentucky, Mayor Greg Fischer ordered a review of public art to find works linked racism and slavery, according to the Courier-Journal. The mayor says he wants to start a “conversation” about the display of public works with a controversial history.

The removal of Confederate statues has not come without trouble, as the protests against the removal of a Gen. Robert E. Lee statue in Charlottesville showed. While proponents of the removals argue it sends a signal to marginalized communities that the ideology they’ve come to represent should not be tolerated, those in favor of keeping them on display think of it as an attempt to erase history.

In San Antonio, not unlike Charlottesville, that division was on full display last Saturday as competing protests over a Confederate monument unfolded in a downtown park.

On opposite sides of the park, hundreds for and hundreds against the removal of a 40-foot-statue of an anonymous Confederate soldier. Earlier this year, all eyes were on New Orleans where workers blacked out company names and covered their faces to avoid being identified by opponents of statue removal. Chants of “you will not replace us” rang across the campus of the University of Virginia as neo-Nazis carried torches and gave Hitler salutes.

But, while cities are moving forward with plans, the U.S. military has refused to rename military bases that have come under scrutiny for bearing the names of Confederate leaders. There are 10 Army bases across the U.S. named after Confederate generals and officials.

Last week, the Army responded to a request by New York lawmakers to change the names of streets named after Confederate leaders on the Fort Hamilton military base. CNN reports a senior Army official said that while they recognize the “significance and sensitivity” of the issue, renaming the streets would be “contrary to the nation’s original intent in naming these streets, which was in the spirit of reconciliation.”

In 2015, when the Pentagon was first pressed on the issue of changing the names of some bases, officials said doing so would do a disservice to the nation’s history.

“These historic names represent individuals, not causes or ideologies. It should be noted that the naming occurred in the spirit of reconciliation, not division,” Brig. Gen. Malcolm B. Frost said at the time. 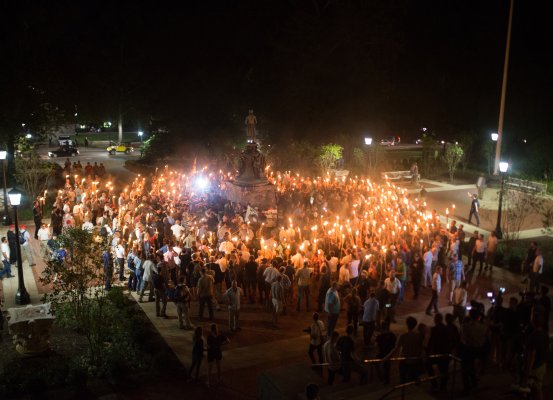 White Nationalists Planning Other Rallies Across Country
Next Up: Editor's Pick