Fake Solar Eclipse Glasses Are Being Sold Online. Here's How to Avoid Scams

Amazon is giving refunds to customers who have purchased potentially counterfeit solar eclipse glasses, which could lead to eye damage in people who wear them while looking directly at the sun.

The e-commerce giant said in a statement it has reached out to some shoppers who bought eclipse glasses on the company’s website that “may not comply with industry standards.”

Amazon did not say how many potentially fake glasses were bought or how many customers were affected. The company said it asked people selling solar eclipse glasses on its website to provide documentation that verifies the glasses were certified and real, “out of an abundance of caution.” Amazon then removed the listings from sellers who did not respond and notified people who bought the glasses from them last week.

The upcoming total solar eclipse will cross the country from coast to coast and be visible from only America for the first time in U.S. history. Here’s what to know about where to buy solar eclipse glasses and how to protect your eyes during the rare event:

Ahead of the total solar eclipse on Aug. 21, ophthalmologists and astronomers alike have been warning people to view the celestial spectacle only through proper solar filters that protect against the sun’s rays. Authentic glasses have lenses that meet the ISO 12312-2 standard, the international standard for safely viewing the sun. They’ll usually look like cardboard 3D glasses, with much darker lenses than ordinary sunglasses, because they block 99.99% of the sun’s rays. The eclipse glasses will also have labels that say they meets the ISO requirement, according to the American Astronomical Society (AAS). Customers will see ISO 12312-2 scrawled somewhere on the sides.

Where can you buy real solar eclipse glasses?

The AAS, the American Academy of Ophthalmology and NASA recommend skygazers buy eclipse glasses from only reputable vendors. The three groups recommend using the AAS list of places where authentic eclipse glasses can be purchased.

How can you spot fake eclipse glasses?

It’s not enough today to just look for the ISO certification, as many vendors have started printing glasses with ISO certifications — even if the glasses do not meet industry standards, experts warned, so your best bet is to only buy from the vendors above.

If eclipse glasses were purchased from an unauthorized dealer online, experts suggest conducting an at-home test. When you look through the lenses, the AAS said, you should not be able to see anything except for the sun or anything else significantly bright, like a halogen light bulb or a bright-white LED flashlight. All such sources of light should look dim through real eclipse glasses. The glasses also should not have any tears or scratches on them.

You need to wear the glasses during the partial solar eclipse, when the sun is partly blocked by the moon, but can take them off for the brief totality phase, in which the sun’s light is entirely blocked for up to 2 minutes and 40 seconds. 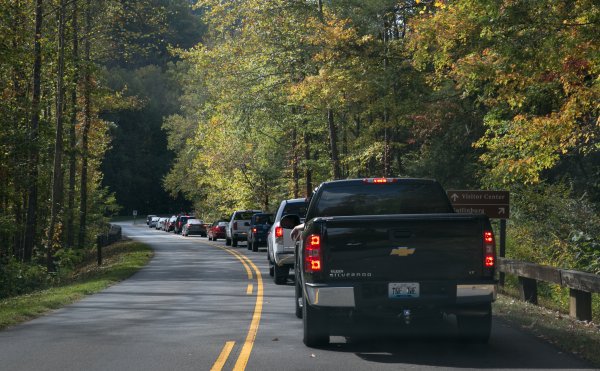 'Biggest Driver Distraction of the Century.' Officials Brace for a Solar Eclipse Traffic Nightmare
Next Up: Editor's Pick