President Trump came before the country Saturday to declare that he was ready to start the national healing after a series of white nationalist gatherings in Virginia, featuring torches and Nazi salutes, devolved into violence that left one person dead and 35 injured.

It was a typical beginning for a president looking to calm the waters after an event that horrified many Americans. But Trump did not linger, as he quickly looked to move on to other topics.

The president walked to a small wooden table, where he started joking about the pen he was using to sign a bill reforming the Department of Veterans Affairs. “The question is, ‘Who’s getting the pen?’” he said, smiling at the military veterans who stood behind him. “Who’s getting the pen? C’mon. You folks argue about it. Let me know.”

Just seconds earlier, a reporter had asked him to comment on the claims of white nationalist protesters that they supported Trump’s agenda. The President declined to acknowledge this or any other questions, despite having called the event a “press conference” on Twitter.

Instead, the President let stand the statement he had just read, condemning “in the strongest possible terms this display of hatred, bigotry and violence on many sides.” The reference to “many sides”—which he repeated, for emphasis moments later—appeared to many observers to equate the white nationalist protesters with the counter-protesters. The words “many sides” soon trended on social media, alongside news that a man had driven a car into a crowd of counter-protesters, killing one woman and sending others to the hospital.

If his intent had been to bring the country together, there was little sign of Trump’s immediate success. His public appearance, with promises of help to Virginia to restore law and order, only triggered more criticism.

Shortly after the president spoke, two Republican Senators joined Democratic calls for Trump to specifically denounce the racist views of the white nationalists who had gathered in Charlottesville, Va. “Mr. President – we must call evil by its name,” tweeted Colorado Sen. Cory Gardner. “These were white supremacists and this was domestic terrorism.”

Minutes later, Florida Sen. Marco Rubio echoed the call. “Very important for the nation to hear @potus describe events in #Charlottesville for what they are, a terror attack by #whitesupremacists,” Rubio tweeted. Trump declined to respond in the hours that followed Saturday.

Trump’s partners in the Republican Party were more pointed in their condemnations of the protesters in Charlottesville, which featured rallies that included chants of “white lives matter,” “end immigration, one people, one nation” and, according to the New York Times, both “you will not replace us” as well as “Jew will not replace us.” The protestors had gathered to denounce the planned removal of a Confederate general statue from a city park. It was attended by David Duke, a former Ku Klux Klan leader, and Richard Spencer of the National Policy Institute, both of whom support creating an all-white ethnic-state in the United States. Spencer speculated on Twitter that Trump’s earlier call to “condemn all that hate stands for” was a condemnation not of the white nationalists, but the anti-facist counter protesters opposing their rally.

There was little doubt that other Republican leaders were condemning the white nationalists. “The views fueling the spectacle in Charlottesville are repugnant,” tweeted House Speaker Paul Ryan earlier on Saturday morning. “Let it only serve to unite Americans against this kind of vile bigotry.” Senate Majority Leader Mitch McConnell echoed that call. “The hate and bigotry witnessed in #Charlottesville does not reflect American values. I wholeheartedly oppose their actions.” First Lady Melania Trump tweeted a condemnation of the violence before the President.

Trump’s decision to refrain from specifically calling out the racist elements of the protest recalled a pattern that had long followed his rise as a political leader. He has repeatedly stated that Americans are all loved and equal, regardless of religion or the color of their skin. But he has also shown greater sensitivity to certain types of crimes and terrorist attacks, making the denunciation of “radical Islamic terrorism” a central plank of his campaign and talking frequently about crimes committed by undocumented immigrants.

By contrast, he has not yet commented on an explosion at a Minnesota mosque on August 5, and he refrained for days from commenting on the shooting of two Indian men at a Kansas bar in February. White House aide Sebastain Gorka said this week that the Trump Administration is waiting for the investigation into the Minnesota attack to rule out the possibility that it was a “fake hate crime” committed by a left-wing activist.

Trump has also taken actions that racists and white nationalists have seen as signs of validation. In November of 2015, he retweeted a racist meme that falsely claimed blacks were responsible for the majority of white murders, and then refused to correct the misinformation. “It’s for other people,” he told TIME, explaining his decision not to correct the falsehood. “Let them find out if it’s correct or not.”

Asked by TIME in 2015 if his campaign rhetoric could lead to innocent people getting hurt, he responded, “People are getting hurt far greater than something I am going to say.”

That zero-sum view of the big political questions of the day—the suggestion that one group of people loses if another wins—is a theme of his worldview, featured in his approach to illegal immigration, crime and international trade. It has also been interpreted by many white nationalists as a partial endorsement of their views, despite Trump’s past denunciations of racism. “The arrow of Donald Trump is pointing in the direction of identity politics, and I think that’s a very, very good thing,” Spencer said shortly after the inauguration, in a radio interview.

When faced with such allegations, Trump has shown little willingness to engage, often trying to change the subject or declining to engage the questions of reporters, who he views as biased against him.

On Saturday, this strategy left him focused on how to dispose of his pen after calling for national unity. He ultimately decided to give the writing instrument to the only female veteran standing behind him. “Ladies first, right?” he said, continuing the levity with a smile. And then he walked away, ignoring yet another round of reporter questions about how he feels about the white nationalists who claim to support him. 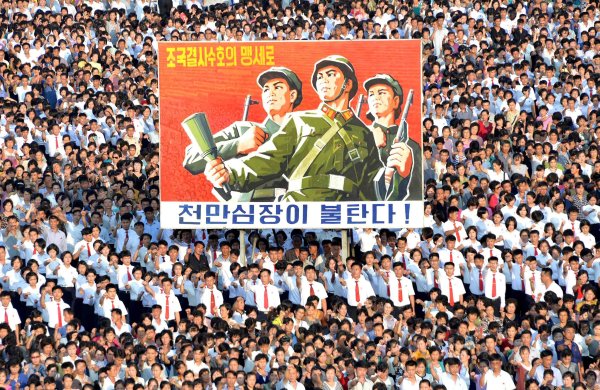