Out of Sight, Out of Mind? Indonesia Temple Drapes a Giant Sheet Over a Statue That Caused Uproar

The managers of a temple in Tuban, a town in the Indonesian province of East Java, appear to have sidestepped a showdown with devoutly Muslim citizens over the recent installation of a 100-foot-tall statue of a Chinese deity — by covering it up with an enormous white sheet.

Infuriated locals said the colossal figure, towering above a Confucian temple, was an “uncivilized” affront to their religion and had no place in the town, the New York Times reports. An campaign was launched online shortly after the statue, depicting the god-like third-century Chinese general Guan Yu, was erected last month. Swelling in size and ambition, the movement demanded that the figure be destroyed.

Temple authorities reportedly arrived at a temporary compromise over the weekend, covering it with a giant cloth to appease protesters. The Muslim-majority Southeast Asian nation has seen a recent escalation in religious tensions, as well as simmering anti-Chinese sentiment. The former governor of the capital Jakarta, an ethnic Chinese Christian commonly referred to as Ahok, was convicted in May of blasphemy following scrutiny from hard-line Muslim groups. 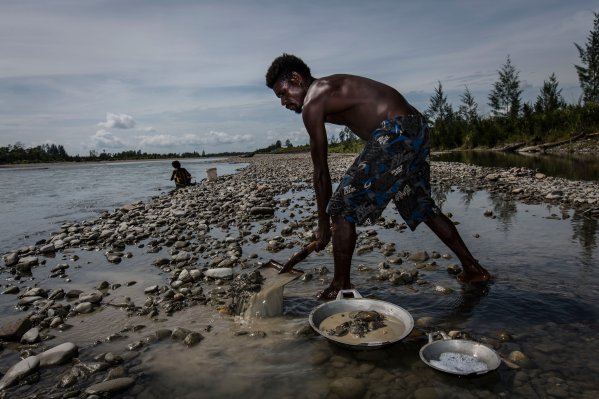 Poverty and Death in Indonesia's Land of Gold
Next Up: Editor's Pick