President Trump Thanks Vladimir Putin for Expelling U.S. Diplomats from Russia: 'Now We Have A Smaller Payroll'

President Trump said that he is “very thankful” to Russian President Vladimir Putin for expelling 755 U.S. diplomats because eliminating their payrolls has cut government costs.

Trump spoke on Thursday from his golf club in Bedminster, N.J., where he is on an extended “working vacation.” His remarks were the first time he has discussed Russia kicking out the hundreds of U.S. diplomats and staff at the end of July.

“I want to thank him because we’re trying to cut down our payroll and as far as I’m concerned I’m very thankful that he let go of a large number of people because now we have a smaller payroll,” Trump said. “There’s no real reason for them to go back. I greatly appreciate the fact that we’ve been able to cut our payroll of the United States. We’re going to save a lot of money.”

The Kremlin ordered the diplomats to leave by September in response to U.S. sanctions against Russia for interfering in the 2016 presidential election.

Shortly after Russia announced the decision, the State Department said the move was “a regrettable and uncalled for act.” Trump himself did not respond, and his silence was noticeable. 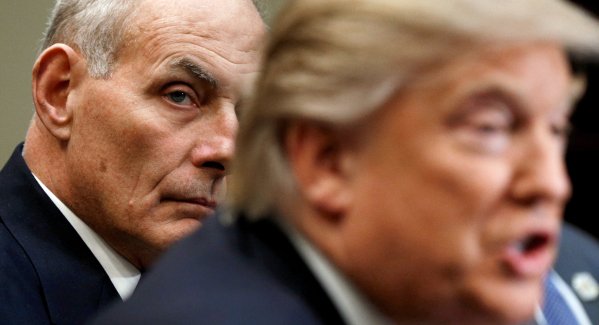 Why General John Kelly Is Trump’s Last Hope
Next Up: Editor's Pick