A mother in Oregon is suing Portland Adventist Medical Center for $8.6 million after she accidentally smothered her four-day-old baby in a hospital bed.

Monica Thompson says that, a few days after her son Jacob was born in August 2012, the hospital put her newborn in bed with her so she could breastfeed him. But Thompson says in the lawsuit that the baby was put there in the middle of the night, while she was heavily medicated. Thompson drifted off, and when she woke up, Jacob was unresponsive.

Jacob suffered severe brain damage and was placed on life support, according to the lawsuit. After six days, doctors told the parents the baby’s comatose state was irreversible. The parents pulled their son from life support when he was 10 days old.

Kristi Spurgeon Johnson, a spokeswoman for Portland Adventist Medical Center, told The Oregonian this week the hospital could not comment on the lawsuit until the hospital had a chance to review it. The hospital also declined to comment on its policy about newborns sharing beds with their mothers.

But the Adventist Health website features “Health Tip” posts about keeping newborns safe, including one tip that reads “child care experts say it’s dangerous for infants to sleep in the same bed with their parents.” The American Academy of Pediatrics has recommended against bed sharing, according to The Oregonian.

Thompson, who is suing both the hospital and the individual nurse involved in the incident, said she was “still drowsy and groggy” from her medication when she realized her son was not moving, her lawsuit states. The suit says Thompson called for a nurse, and when none came, she “carried her son to the hallway and frantically yelled for help.”

“I am sharing our story in the hopes that no mother or family will ever have to suffer through a preventable tragedy such as this. What happened to us could have easily been prevented had the nurses been doing their job,” Thompson said in a statement through her lawyer.

The lawsuit seeks damages for the baby’s “desperation and anxiety” as he suffocated and for Thompson’s “severe emotional distress upon unintentionally killing her firstborn child.” It also asks for damages to cover medical and counseling expenses for depression and post-traumatic stress disorder, which Thompson says were caused by the death of her son. 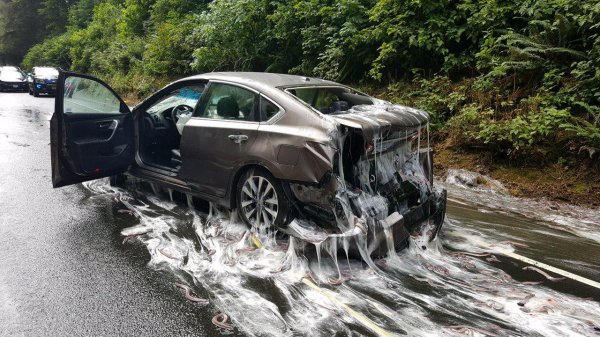 Truck Full of Eels Overturns and Dumps Slime All Over Oregon Highway
Next Up: Editor's Pick