Last Year's Global Temperatures Were the Highest Ever Recorded

Less than a week after President Donald Trump notified the United Nations of his intent to exit from the Paris climate accord, his government’s chief science agency released a report demonstrating that global warming is real and getting worse.

The report, prepared by almost 500 scientists from around the world, shows that last year’s average global temperatures were the highest ever recorded. There were more major tropical cyclones than usual, longer droughts and less snow cover. After years of increasing, Antarctic sea ice declined, undercutting an argument by those who dispute the science of global warming.

“The major indicators of climate change continued to reflect trends consistent with a warming planet,” said the report, which was edited by Jessica Blunden and Derek S. Arndt of the National Oceanic and Atmospheric Administration.

Reports, such as the NOAA-supported one released Thursday in the Bulletin of the American Meteorological Society, are “hard to dodge,” according to David Schnare, who worked for a short time at the Environmental Protection Agency under Trump and wants the administration to abandon any efforts to tackle climate change. He said this and other federal reports documenting the severity of climate change could make it harder for the EPA to reverse its 2009 finding that carbon dioxide emissions pose a danger to the public.

Trump has labeled climate change a “hoax,” and members of his administration have downplayed the role burning fossil fuels is having on the Earth and its changing weather patterns.

“Some call it climate change; some call it something else,” Crossley said in a phone interview. But whatever you call it, “it’s putting a strain on local resources.”

Crossley, who is also vice president of the International Association of Emergency Managers, said his counterparts around the country are dealing with similar problems. He said that while federal reports documenting the extent of climate change might not capture the public’s attention, they can help persuade local officials to better prepare for future storms, floods and other challenges. Those steps can include building storm-resistant infrastructure, and helping people who live in vulnerable areas move someplace else.

One of the surest signals that local governments are taking climate change seriously is that they’re looking for new ways to pay for it. In South Florida, which is struggling with both rapid sea-level rise and an increase in flooding, the city of Coral Gables is looking for ways to start saving now for higher stormwater-managements costs.

“The earlier you do stuff, the easier it is to prepare,” said Abby Corbett, a lawyer who specializes in climate adaptation and is advising Coral Gables. She said that while cities in South Florida have long had to cope with flooding, climate change could cause people to leave, shrinking the city’s tax base.

“It may be that we have to struggle with revenues, just as costs are increasing,” Corbett said.

Local officials aren’t the only ones trying to cope with the effects of climate change. The accumulation of scientific data on global warming has put pressure on the U.S. coal industry, which is already suffering because of competition from cheap natural gas prices and renewable energy. It increasingly has to deal as well with the perception that coal is ruining the planet.

“I don’t think the public is in the dark” about the scientific consensus on climate change, said Luke Popovich, vice president of the National Mining Association, which represents coal companies. He asked why the U.S. should reduce its own coal use when other countries, chiefly China and India, continue to burn it. And he said that for most people, climate change remains low on their list of worries.

“No matter how much information comes out of NOAA, it is not going to help put more pressure on the U.S. to do more,” Popovich predicted. “We’ve got a hell of a lot of other problems to address.” 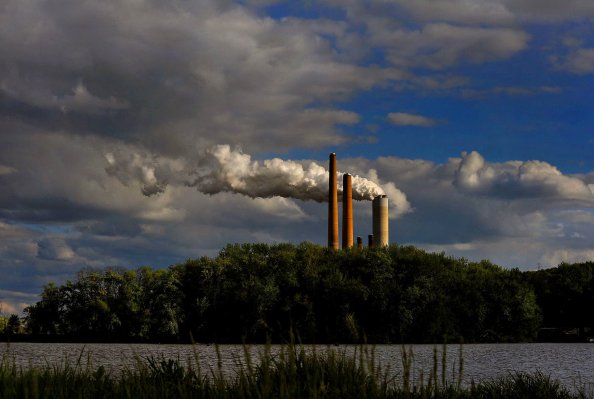 Yes, You Can Blame Climate Change for Extreme Weather
Next Up: Editor's Pick