At 8:45 Wednesday morning, Taran Singh Brar pulled up to the White House Ellipse in a U-Haul. Inside: the puddled plastic skin of a 30-foot inflatable chicken, soon to begin a daylong vigil outside the home of the President.

In many ways, it was a perfect time to inflate a giant bouffant-sporting chicken in front of the White House. Originally conceived as a commentary on Trump “hiding his nest eggs” in the form of undisclosed tax returns, the balloon had evolved into an indictment of the President’s “chicken hawk foreign policy”—especially timely because the President had been making incendiary remarks about North Korea.

Soon the rooster was flooded with selfie-shooting fans and local media. After seeing the chicken on TV, one man raced in from Baltimore to witness the big bird.

“I don’t know, he just loved it,” said Brar. “His girlfriend was there too, laughing along.”

The rise of the avian monolith, and its subsequent burst of internet fame, might have felt impromptu to passersby. But really there was nothing spontaneous about the arrival of the great bird, who Brar affectionately calls “Chicken Don.”

Brar had spent months negotiating permits with authorities and studying the exact trajectory of live feed cameras trained on the White House. “I triangulated,” Brar said. “There’s a reason it was there rather than to the left a little bit, it would have been blocked.”

The iconography of Chicken Don is straightforward and compelling: he sports a shiny gold upswept hairdo, comically angry eyebrows and a bright red wattle. Designed by a Seattle-based artist to commemorate the Chinese New Year, Brar originally deployed the inflatable bird at the Tax March protest in April—but this week he really took off.

“I knew from the get-go that this could be something that flies into every corner of the world,” sad Brar, who hoped Don would be a powerful image that could cut through the wall of noise coming out of the embattled White House.

He’s now spawned dozens of knockoffs online. Want a ceramic likeness of the chicken? It’s yours for $47.99 on ebay. You can even get your own, one-third scale inflatable chicken, though that will put you out about $500 before shipping (still a bargain compared to the original, which boasts a $1,300 price tag).

Brar has more or less embraced Don’s feathered fame, and the many, many terrible puns that have come with it (“One of the really good ones is like ‘fowl play, fowl behavior,’ but with a ‘w,’ you know?” he says.”And there’s also a low-brow one that I don’t really put out there because it’s too much.”)

For now, Chicken Don sleeps again in the back of Brar’s U-Haul, which he’s dubbed a “mobile hatching facility.” But fans can take heart—Brar is already masterminding another public appearance for the chicken, this one even more ambitious that Wednesday’s stunt.

He’s hoping to deploy a flock of “dozens” of blow-up chickens flanked by inflatable representations of Russian arms around the Washington Memorial to mock Trump’s reported affection for military parades. Brar says he’s already at work securing a permit, and he’s in talks with the artist who designed Chicken Don for the balloon weaponry.

The militant roosters will come from all over the country—Brar’s got lots of friends with versions of the chicken ranging from six to 16 feet ready to pitch in for the cause. Chicken Don will probably remain at the top of the pecking order, though—he’s one of only two full-scale 30-foot models in the country.

Beyond political messaging, Brar says he just wanted yesterday’s protest to bring some levity to a nation exhausted from parsing through months of political drama, a nation that had in the last few hours started seriously worrying about the specter of nuclear war.

He thinks it worked.

“Trump causes so much stress and chaos in people’s lives,” Brar said. “Something cute like this that resonates brings a lot of joy.” 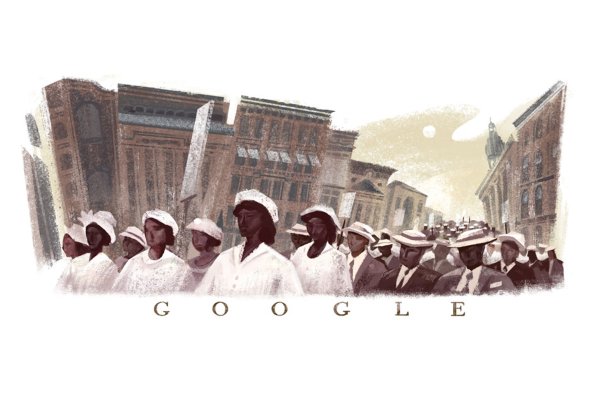 Google Doodle Commemorates 100th Anniversary of the Silent Parade
Next Up: Editor's Pick