This Tiny Game of Thrones Detail Could Be a Sneaky Fan Reference. Or Not

Although many Game of Thrones fans have given up on the idea of Lady Stoneheart ever appearing in the show, some apparently still keep a watchful eye out for any sign of zombie Catelyn Stark.

While Arya and Brienne sparred — as Sansa watched from above — in Sunday’s episode, one observant viewer thought they may have spotted Mama Stark returning to check up on her two daughters.

“If you watch the sparring scene in [season seven episode four, “The Spoils of War”] between Arya and Brienne, when Arya asks, ‘Didn’t you vow to serve both my MOTHER’s daughters?’ – at the word ‘MOTHER’ you can see a woman in a long green dress [with] long auburn wavy hair with her head down walking past the background gate, resembling Cat,” wrote Reddit user GrennsGal. “If it’s unintentional, it’s awesome. If not, more awesome. Catelyn cheking on Brienne keeping her vows.”

Unfortunately, George R.R. Martin has confirmed that Lady Stoneheart — though an important character in the Song of Ice and Fire book series — was axed from Thrones long ago.

“I think one of the biggest ones would probably be when they made the decision not to bring Catelyn Stark back as Lady Stoneheart,” he told TIME of his least favorite book-to-show changes. “That was probably the first major diversion of the show from the books and, you know, I argued against that, and [showrunners David Benioff and Dan Weiss] made that decision.”

Nonetheless, we’ll let you have this, Lady Stoneheart enthusiasts. 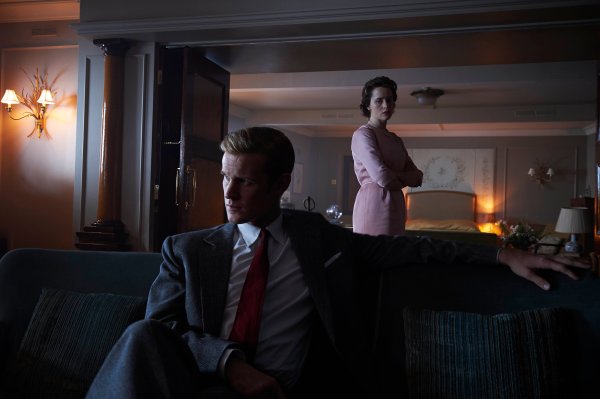 Queen Elizabeth’s Marriage Is Under Fire in The Crown Season 2 Teaser
Next Up: Editor's Pick