A white Ford Bronco, driven by Al Cowlings and carrying O.J. Simpson, is trailed by police cars as it travels on a southern California freeway on June 17, 1994, in Los Angeles.
Joseph Villarin—AP
By Madeline Farber

The infamous white Ford Bronco is making its second TV debut. But this time, it won’t be carrying O.J. Simpson on his slow-speed chase down Los Angeles’ 405 freeway.

The San Francisco Examiner reports that the car is slated to appear on the History Channel’s “Pawn Stars” — a show set at the Las Vegas-based World Famous Gold & Silver Pawn Shop. The episode, which is called “If the Pawn Don’t Fit,” will air on Monday, Aug. 14, at 10 p.m., the Examiner reports.

Simpson’s former sports agent, Mike Gilbert, who is also the current owner of the SUV, is working with History to strike the deal.

“Not many people realize it’s for sale … and I just thought it was a really cool thing to put on the show,” Rick Harrison, one of the show’s personalities and co-owner of the store, told the Examiner.

Twenty-three years ago, the 1993 Bronco was driven by Simpson’s friend Al Cowlings five days after the murders of Simpson’s ex-wife, Nicole Brown, and Ron Goldman, according to the Examiner.

Gilbert bought the vehicle from Cowlings for $75,000. But other than being displayed in a Las Vegas casino in 2003, it has been kept in storage. 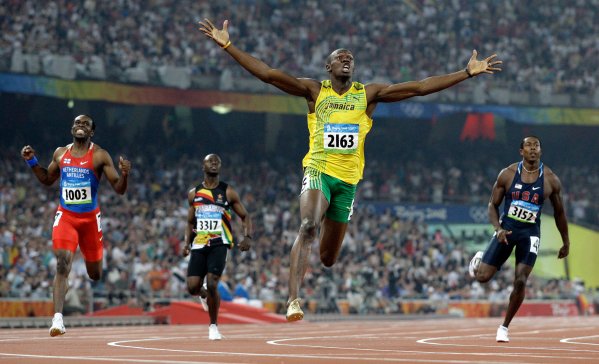 Usain Bolt
Next Up: Editor's Pick