A Small-Scale Power Solution Could Pay Big Dividends Across the U.S.

The Brooklyn waterfront had all the trappings of a Formula One Grand Prix on a recent weekend, with high-performance racers taking tight corners at speeds up to 140 m.p.h. But rather than running on gas, these 20 supercharged Formula E cars and the surrounding venue were largely powered by renewable sources of electricity.

Such a feat was made possible by the installation of a tiny power grid designed just for the race site by the electricity company Enel. Known as a microgrid, the apparatus incorporated solar panels, batteries and a novel fuel source called Aquafuel that is devised to meet the needs of high-performance vehicles. Designers also included a link to the larger electric grid for times when the microgrid produced too little–or too much–electricity.

“The system is capable of determining where to take the energy from, whether from the grid, from the battery or from the solar panels,” says Chris Regan, Enel’s Formula E project manager. He characterizes the effect of this smart system as “more sustainable, lower costs, lowest emissions.”

You don’t have to be an eco-minded racing fan to see the value. Microgrids have become increasingly popular across the U.S. in recent years, embraced by everyone from community developers to military officials. They have been installed as part of a 40-solar-panel infrastructure project atop a peak in North Carolina’s Great Smoky Mountains; used as a way to deliver power to the 2,800 residents of Borrego Springs, Calif.; and implemented at the U.S. Army’s Fort Carson in Colorado.

The reason is as simple as the bottom line: the technology offers a way for communities to collect, store and use their own energy, rather than pay for it to be shipped from miles away. In the U.S., microgrids often include batteries, a localized renewable energy source like solar panels, and sophisticated software to determine when to buy energy from utility companies and when to sell any excess power back.

Thanks to their limited scope, microgrids help protect against disturbances such as blackouts and cyberattacks, which can lead to expensive and time-consuming power outages. The solar panels and self-contained storage mean that a microgrid can disconnect from a regional electric grid and operate independently if necessary. That’s a huge improvement–both in cost and environmental impact–from the diesel backup generators that many facilities rely on today.

The rise of microgrids comes as part of a broader shift in the ways Americans think about electricity storage and delivery. The grid, long associated with large infrastructure such as transmission lines, power plants and substations, also functions at the community and neighborhood levels. Indeed, microgrid capacity is expected to double by 2020, totaling 4.3 gigawatts in microgrid potential, according to GTM Research, an industry analyst.

This rapid growth would likely have surprised early advocates of the technology, which grew to help power places in the developing world that could not easily link to a primary electric grid. In remote parts of Africa and South America, where hundreds of millions of people live without reliable electricity, energy companies have turned to solar panels, battery storage and the software to run them as a way to deliver power to detached communities.

“Microgrids that can isolate from the grid when needed have value in both developing worlds and developed worlds,” says Gregg Patterson, CEO of Demand Energy, a company that builds microgrids. “We installed a microgrid in Brooklyn and Queens because it was in the most challenged network” in the region, he says.

The promise of both resiliency and frugality has made the U.S. military one of the biggest boosters of microgrids. According to GTM, the armed forces are expected to operate nearly one-third of U.S. microgrid capacity by 2020. The technology will allow the military to reduce reliance on expensive and high-polluting diesel as its backup generation. The savings are expected to total up to $20 million annually for a large military installation, according to a report from the Pew Charitable Trusts. Even for the best-funded military on the planet, there’s nothing micro about that. 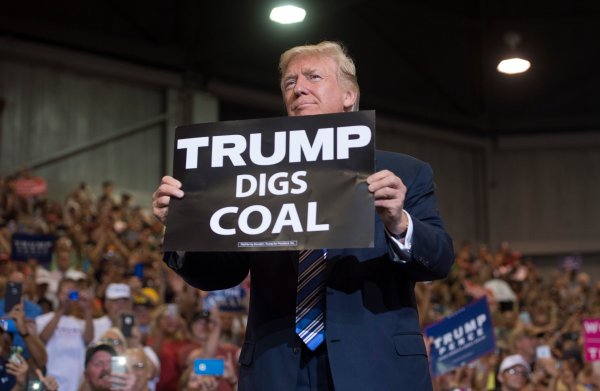 Trump Touts 'Clean Coal,' But His Policies Don't Support It
Next Up: Editor's Pick