The True Meaning of the Great American Eclipse

Despite all the hype, the moon has nothing special planned for Aug. 21. It will continue doing what it’s done for more than 4 billion years—insensibly circling Earth, a dead rock at the end of a long gravitational tether.

The sun has nothing special planned either. It will sit where it must sit and burn as it must burn to sustain the flock of planets and moons and asteroids and comets that have orbited it for so long.

That’s how things go in the clockwork cosmos, and yet once in a while, there’s poetry in the machinery. Once in a while, the wheels click in synchrony and the indifferent universe offers up a rare spectacle. Just such a thing will happen on Aug. 21 as the moon’s orbit crosses in front of the sun at the precise spot to eclipse its face and appear to snuff its fires.

A total solar eclipse occurs somewhere on the face of Earth every 18 months. But it usually plays out over water—which covers 70% of the planet’s surface—or over unpopulated land. This month things will be different. The sky show that is being dubbed the Great American Eclipse will begin in the Pacific Northwest and make first landfall over Lincoln Beach, Ore., at 9:05 a.m. P.T. It will track southeast across the U.S., inking a narrow stripe of total darkness over 12 states before passing into the Atlantic near Charleston, S.C., at 2:48 p.m. E.T.

A total Solar Eclipse photographed in 2008. This composite combines hundreds of images showing exactly what the human eye would see if it was possible to remove the blinding glare caused by the heavenly event.
Milloslav Druckmuller—Barcroft Media/Getty Images

The band of totality—the strip of land in which the sun will be entirely obscured—will be just 70 miles wide. Only 12 million Americans live in that corridor, but 88 million live within 200 miles, and 350 million live within one day’s drive. A great many people will be hitting the road to make that trip.

Eclipse watchers squint through protective film as they view a partial eclipse of the sun from the top deck of New York's Empire State Building Aug. 31, 1932.
AP

No matter how big the arriving hordes, Hopkinsville, like other towns in the path of totality, is making elaborate plans to host them. The local government has consulted with the FBI, FEMA and the Department of Homeland Security to game out emergencies.

Traffic lights on surrounding highways will be switched to a fixed green, and side streets intersecting the traffic flow will be closed. Trains will be halted so the noise won’t disrupt the viewing experience. First-aid stations are being established throughout the county, pallets of bottled water are being shipped in, and refrigerated trucks will park outside local restaurants to hold overflow food.

Other towns in the eclipse’s path face challenges particular to their environment. Casper, Wyo., with its near mile-high elevation, offers exceptional viewing through the thin air, but that can mean dehydration and altitude sickness for visitors accustomed to sea-level living. The heat and the low seasonal rainfall present wildfire risks.

“Just pulling over a car on dry grass can start a fire,” says Anna Wilcox, executive director of the Wyoming Eclipse Festival. “A spark or even the added heat from the car can be all it takes.”

The tourist explosion should be a boon to local economies. Kentucky estimates a $30 million windfall. Wyoming isn’t speculating on its predicted haul, but dedicated eclipse chasers are expected to spend up to $5,000 a throw in the state. Still, the rarity of the event means that even the people who make it their business to know these things admit they’re flying blind.

“We’re not working with much,” says Carter Wilson of STR Analytics, a business benchmarking firm. It’s easy enough to estimate the economic impact of, say, a national political convention, because there is plenty of historical data. Eclipses offer no such baseline. “Certainly, you can see what’s happening on booking sites like Expedia,” Wilson says. “You have motels charging $1,500 per night. With planned events like the Super Bowl, we see 300% to 1,000% increases in room rates.”

The opportunism has put some local governments on guard. Casper officials have made it clear they will not abide price gouging for basics such as food and water.

Another worrisome form of troublemaking is the flood of counterfeit eclipse glasses. It’s unsafe to look directly at the sun until the point of totality. Specialized eclipse-viewing glasses eliminate the risk, but it’s hard to know by looking if you’re buying the real thing or a cheap knockoff. Both NASA and the American Astronomical Society list reliable brands and marketers on their websites, and eclipse watchers are encouraged to check them out before they buy.

Total Solar Eclipse, 1851. Members of the Edinburgh expedition on Bue Island, Norway with their instruments set up ready for viewing the eclipse , 28 July 1851. Members of the crew from their transport vessel are seated on right by empty packing cases. From Astronomical Observations made at the Royal Observatory, Edinburgh.
UniversalImagesGroup—Getty Images

The sky show is occurring in a summer of America’s profound discontent—making it a sort of Woodstock writ large. Like Woodstock, it comes at a time of turmoil and has the potential to elevate us—if only briefly—above those troubles. Very much unlike Woodstock, it will be a celebration that knows no single region, subculture or demographic slice.

It would be a sublime act of American vanity to infer anything other than serendipity in the eclipse’s occurring when we so need the uplift. And yet the very mechanics of solar eclipses have long tempted us to see more. The sun’s diameter is 400 times that of the moon, which ought to make it impossible for the moon to block the sun’s light. But the sun is also 400 times the moon’s distance from Earth, so the two disks appear the same size to us, making the eclipse possible.

Is that merely a function of cosmic randomness? Yes. Might you also find order and even divinity in it? Yes again. There is nothing wrong with seeing the 2017 eclipse as a gift to a riven nation—provided we resolve to be worthy of it. 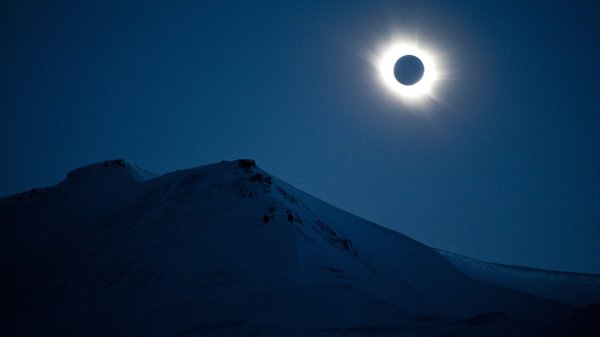 What Solar Eclipses Have Taught Us About the Universe
Next Up: Editor's Pick