Why Eastwatch Could Be a Pivotal Location on Game of Thrones

Ever since Jon Snow sent Tormund and his Wildling army to guard Eastwatch-by-the-Sea in the Game of Thrones season premiere, the plot has been hinting at a major battle at the castle. And judging by the title of the upcoming fifth episode, “Eastwatch,” the time for the (presumably epic) showdown may be nearly upon us.

“Last time we saw the Night King was at Hardhome,” Jon told Tormund, referring to the season five massacre at the Free Folk fishing village. “The closest castle to Hardhome is Eastwatch-by-the-Sea.”

Eastwatch-by-the-Sea is the easternmost castle along the Wall belonging to the Night’s Watch. It is one of the three remaining Wall castles — along with Castle Black and The Shadow Tower — still manned by the men of the Watch.

It also seemed to be referenced a second time in the premiere when the Hound described his fire vision. “Ice, a wall of ice. The Wall…It’s where the Wall meets the sea. There’s a castle there. There’s a mountain, looks like an arrowhead. The dead are marching past, thousands of them.”

This scene — along with shots from the season seven trailers — seemed to suggest that Beric Dondarrion and the Brotherhood Without Banners were also headed toward Eastwatch, heralding a meeting of several fan-favorite characters.

Not to mention that this week’s preview shows Jon dead set on convincing Daenerys that it’s time to head north to fight the White Walkers. “Bran saw the Night King and his army marching towards Eastwatch,” he says as a shot of Bran’s ravens spying on the wights appears.

However, neither the promo nor the photos for the episode show the actual castle in the mix. Hopefully it’s still standing. 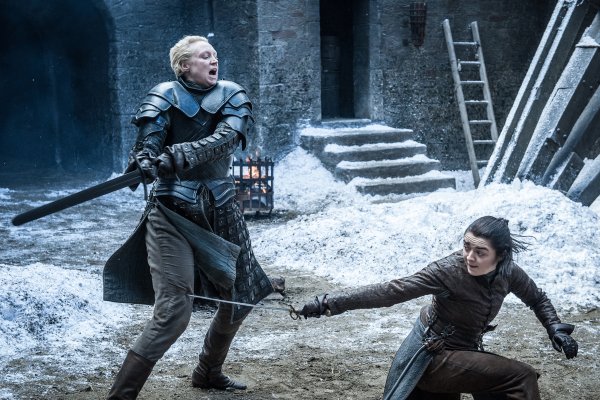 This Tiny Game of Thrones Detail Could Be a Sneaky Fan Reference. Or Not
Next Up: Editor's Pick