Paul Manafort's Home Was Raided by FBI Agents. Here's What That Could Mean

FBI agents seized documents and other materials related to taxes and foreign banking in the unannounced raid. The move, which required a federal magistrate judge to approve a search warrant based on probable cause that evidence of a crime could be found in Manafort’s home, is a sign that the investigation is intensifying, legal experts say.

The search also indicates that Manafort may be in a tenuous position with prosecutors. Former Assistant U.S. Attorney Renato Mariotti says that the issuing of a warrant is a sign of significant heat from the prosecution and might indicate that Manafort has not “flipped,” or revealed damning evidence about other witnesses. “At this point, he is not on the government’s team, so to speak,” Mariotti said.

Jonathan Turley, a law professor at George Washington University, agrees that the search means prosecutors are “ratcheting up the pressure” on Manafort. The decision to call for a search is a highly public and isolating way of seeking out evidence, he added. “This indicates that the special counsel is putting this relationship on a more antagonistic or oppositional basis,” Turley said. “This is not something that you do with a cooperative witness.”

The looming prospect of criminal charges bolstered by evidence gathered in a raid, said Turley, could push a witness to be more forthcoming—or the President to exercise pardon power, which could undercut the investigation.

The fact that a search was deemed necessary is especially revealing because the grand jury convened by Mueller last week already has the power to acquire documents through subpoenas.

If prosecutors suspect that a witness is not producing subpoenaed documents in their entirety, or that they are altering or even destroying requested documents, a search warrant can provide a solution. A search could also circumvent a witness pleading the Fifth Amendment to keep from procuring documents for a subpoena.

And, Mariotti said, a raid can provide additional details about how documents are kept or maintained that can be useful in an investigation. For example, if documents were intentionally moved from an office to Manafort’s home, that could be revealing.

Manafort, who served as Trump’s campaign manager for several months, turned over documents to the Senate judiciary and intelligence committees last month.

The act of carrying out a search on a witness is a powerful psychological tool that can prompt a witness to become more forthcoming or name more targets. It’s a sign that lack of cooperation from the witness won’t be taken lightly. “The more isolated a target feels, the more likely they will cooperate,” Turley said. “Nothing concentrates the mind of a target more than a pre-dawn unannounced raid on his home.” 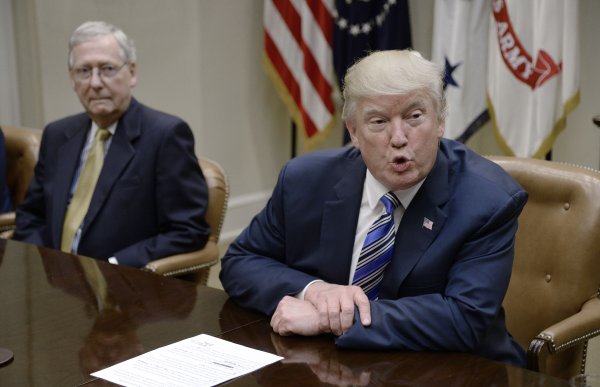 Trump Hits Back at McConnell After Criticism
Next Up: Editor's Pick