Does Tweeting at Companies Really Work?

Maybe your flight was delayed. Maybe your Wi-Fi went on the fritz. Maybe you spent hours assembling a crib, only to find out that it was shipped to you with a crucial thingamajig missing. The part that comes next – contacting customer service to get your problem fixed – is full of pitfalls that can add to the frustration, be it faulty voice recognition, boilerplate email responses, rude representatives or long waits. So it is little wonder that many consumers have stopped bothering with old-fashioned phone numbers and are trying a different avenue: pinging companies via social media.

Consumers have long tweeted at brands when they are either furious or delighted, but customer service experts say it is becoming more common for consumers to use social media as a “routine” way of getting help. Individual retailers are now dealing with thousands of customers on Facebook and Twitter every month, and one study found that more than one-third of millennials have used social media this way. But is tweeting at a company really the best way to get your voice heard?

It depends on what the issue is and on the company. While an increasing number of companies have full-time staff dedicated to trawling social media and corresponding with consumers, many businesses still devote most of their resources to methods like staffing call centers or live chats — because those are the methods most consumers are still using.

StellaService, a firm that helps businesses improve their customer service, recently tested the social media chops of e-commerce retailers ranging from Apple to J. Crew and the results varied widely. Acting like digital mystery shoppers, they tweeted and posted complaints and questions that real customers might have. And while some companies responded 100% of the time, in just a few minutes, others took more than 24 hours to respond, if they responded at all.

What they found is that companies were most likely to respond when customers had product or policy questions. Social media can be a big time-and-energy-saver when the answer to your query might otherwise be buried in some corner of the Internet or require a phone call. Want to know how to mail in a return? Whether a particular product is available in a particular city? What to do when you bought something and it came out of the box messed up? Whether there are any promo codes you can use at the moment? You can often shoot a tweet at a company, skip the googling and wait for the answer to roll in.

StellaService found that companies were less likely to respond to straight-up complaints, which could be about anything from the layout of a particular store to the general opinion that a certain company has the “Worst customer service EVER!” And social media isn’t so good for complex issues like an alleged error on your telecom bill five months ago. In the study, about 40% of the time companies responded with some sort of redirect: pointing you right back to the phone line or asking for more information in a direct message so you aren’t blasting your account info to the masses.

A separate 2016 customer survey found that while 60% of people who used the phone for customer service got their issues resolved, only 16% of those using social media did.

The “best in class” types like online shoe retailer Zappos — which got top marks in the StellaService test— are using third-party software to confirm identities and take care of whatever the problem might be on the platform where the customer started the conversation. Being responsive helps keep the company’s Twitter account from becoming the type of place people go only when they’re at their wit’s end, says Rob Siefker, Zappos’ head of customer service. “You see people interacting with other businesses and feel like the only way they have an avenue to get any attention is to blast a company on social media,” he says.

One advantage of sharing negative stories on social media is that it may get the company’s attention more quickly. Unlike an email that might go unanswered for days, callouts on Twitter and Facebook have the potential to be “visible and ugly if they’re left ignored,” says customer service consultant Micah Solomon. And companies likely won’t be rude when they’re responding in writing for all to see. “You never want to fight with a customer or dispute a customer’s statements in public,” Solomon says. In one famous case, a disgruntled British Airways passenger actually purchased promoted tweets to hassle the airline for losing his family’s luggage — and he eventually got an apology as well as his bag.

Even if you don’t get the response you want from the company, there are still upsides to airing complaints publicly online. “There’s a cathartic benefit to those kinds of postings,” says Scott Broetzmann, who runs a Virginia-based customer service consulting firm called CCMC, “and there’s also almost a good Samaritan motivation.” Telling a company that they’ve messed up can serve as a warning to friends in your network. And the feeling of agency one gets by speaking out is a far cry from the feeling of helplessness you might experience while on a very long hold.

As digital natives make up a bigger slice of the market, companies will have little choice but to provide customer service this way. “It’s happening whether or not retailers are prepared for it,” says StellaService’s Carol Krakowski. Many big-box companies are already seeing sizable volumes. For instance, Target’s dedicated customer service handle — @AskTarget — is now fielding roughly 3,500 tweets and direct messages each month. All told, the company responded to 100,000 customers on Facebook and Twitter last year, Target tells TIME.

Still, customer service gurus emphasize that social media won’t take the place of email, phone and live chat — at least not anytime soon. Many shoppers will want to resolve these issues privately, no matter how mad they are. And it’s easier to follow up on questions in a one-on-one conversation.

“It’s going to still take another part of a generation [for social media] to eclipse traditional channels of complaining,” Broetzmann says. “But as a shaming channel, it’s there.” 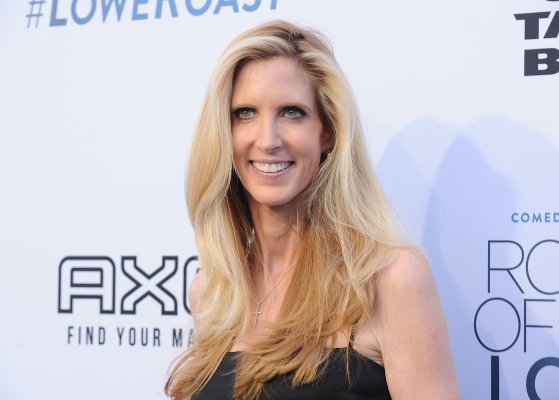 Ann Coulter vs. Delta: The Internet Takes Sides
Next Up: Editor's Pick