Here's How Many Nuclear Weapons the U.S. Has

North Korea on Wednesday threatened to attack the U.S. territory of Guam, the latest in a series of mutual provocations as tensions between the two countries continue to escalate. That development came after President Donald Trump said Tuesday that North Korea “will be met with fire and fury like the world has never seen” if it continues its aggressive behavior.

Trump followed up on Wednesday in a series of tweets boasting about the U.S. nuclear arsenal. “My first order as President was to renovate and modernize our nuclear arsenal. It is now far stronger and more powerful than ever before,” he tweeted. “Hopefully we will never have to use this power, but there will never be a time that we are not the most powerful nation in the world!”

Here’s what you need to know about the size and reach of the American nuclear arsenal.

How Many Nuclear Weapons Does the U.S. Have?

As of July 8, the United States has 6,800 warheads, according to data from Hans Kristensen and Robert Norris at the Federation of American scientists. 2,800 of them are retired, 4,000 are stockpiled, and 1,800 are deployed. The total number of U.S. warheads is second only to Russia, which currently has 7,000 of them.

Aside from North Korea, the other nuclear powers have between 80 and 300 warheads each, and 1,135 in total. As of July, North Korea was thought to have the material for a maximum of 20 warheads.

It was previously thought that North Korea lacked the technical sophistication to make nuclear warheads small enough to be delivered via long-range missile. But as Kelsey Davenport, the Director for Nonproliferation Policy at the Arms Control Association, explains, U.S. intelligence officials believe that’s no longer the case, as reported by The Washington Post on Tuesday.

Davenport estimates that the range of a U.S. intercontinental ballistic missile exceeds 10,000 kilometers, or approximately 6,213 miles.

Which Other Countries Have Nuclear Weapons?

Nine countries have or are believed to have nuclear arsenals, according to the Arms Control Association: the United States, Russia, the United Kingdom, France, Israel, Pakistan, India, China and North Korea.

The United States developed and used the first nuclear weapons in 1945, when they dropped the Atomic bombs on Hiroshima and Nagasaki at the end of World War II. This act fueled the start of the “arms race,” a competition between the United States and the Soviet Union for the most effective and largest number of nuclear arms.

In 1970, just eight years after the Cuban Missile crisis provoked fears of nuclear war, the Treaty on the Non-Proliferation of Nuclear Weapons, or NPT, was ratified; it was extended indefinitely in 1995. Under the treaty, the five permanent members of the United Nations Security Council — China, France, Russia, the United States and the United Kingdom — were acknowledged as nuclear powers. Other countries that joined the treaty agreed not to pursue nuclear weapons development, although they are allowed to use nuclear technology for non-military purposes, like scientific research.

Israel, India and Pakistan never signed the treaty. Although Israel does not officially acknowledge their arsenal, the country is believed to possess approximately 80 warheads. North Korea signed the treaty but withdrew in 2003.

“Certainly North Korea’s decision to leave the treaty and pursue nuclear weapons does weaken the treaty,” says Davenport. “It’s critical that the United States and the broader international community try to ensure that North Korea does not proliferate its nuclear technology to any other state or non-state actors.” 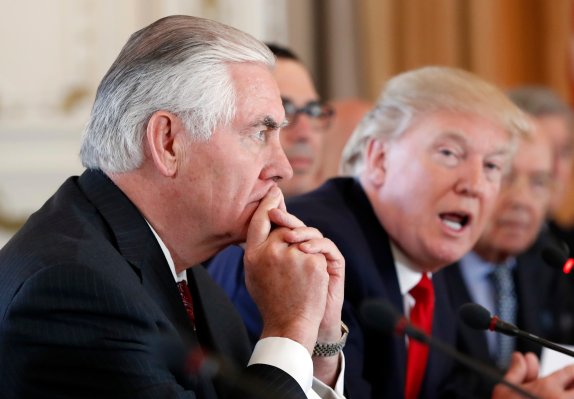 Tillerson: ‘Americans Should Sleep Well'
Next Up: Editor's Pick