The Bachelorette Recap: Who Did Rachel Choose?

Rachel Lindsay’s journey to find love and a Neil Lane diamond engagement ring on The Bachelorette is finally drawing to a close. When we last saw Rachel, she had her final fantasy suite date with Eric and was about to give the key to the Fantasy Suite to Peter when the producers realized they needed to add some drama. So they cut short the Fantasy Suite show and rolled it into the finale, which, frankly, makes the finale feel rushed and lose some of its romance. At long last, though, the finale is nigh, unless, of course, the producers figure out a way to make the finale into a cliffhanger, too.

As you may recall, just as Peter was about to get into the Fantasy Suite, reality got in the way. Because Peter is a real, sincere human being, he has a few doubts about promising Rachel that they’ll live happily ever when the cameras disappear. He isn’t positive that he wants to get engaged for all the right reasons, and Peter is only here for the right reasons. If Rachel can’t accept that, well, he will make a fine star of The Bachelor. Luckily she comes to her senses and they got to kick it in the Fantasy Suite.

Bryan Gets His Final Fantasy

Rachel and Peter had a lot fun, but when morning breaks, she is delivered to Bryan’s doorstep. As they ride horses through a vineyard in Rioja, Spain, he says he feels like he is ready to be engaged. The only dark cloud is that Rachel is a wee bit distracted, because “Peter messed with her mind.” Oh sure, blame the victim. Bryan can tell “she wasn’t all there.” Bryan calls her out on it, she apologizes for her thinking about her other boyfriends, America pretends that is a super normal thing to say on primetime television when children are still awake, and then Rachel and Bryan head to the Fantasy Suite.

There are three men left and Rachel clearly only has a connection with two of them. However, Peter threw her a curve ball with all his realism and honesty, when all she wants is a fantasy with a rose and diamond ring at the end of her journey to love. Despite her doubts, she says goodbye to Eric and hands roses to Bryan and Peter. Because this is a three-hour live finale, there is plenty of time for Eric to have grown a massive Letterman break-up beard and to come out and share his feelings with the live studio audience (and Rachel and Chris Harrison). He explains that he was a boy, but Rachel made him a man (in the Fantasy Suite?).

Ballooning with Bryan (Not a Euphemism)

Nothing like hot air ballooning over Spain for a taste of what real life is like, eh? Rachel and Bryan bond during their last moments together, and by “bond” we mean gluing their faces together much to the (probable) horror of the cameraman. The producers try to create some drama by talking about Rachel “but” it’s pretty clear they like each other a lot. Bryan makes her a Spanish-Dorkwad dictionary with words like “husband” and “lips” and “Big Rach”. She is smitten. Who wouldn’t fall for a guy who called her “Big Rach”?

The Final Date with Peter

Rachel and Peter spend their final date in the romantic setting of … a monastery. (Man, the producers don’t give this guy a break!) Peter knows he has to commit to Neil Lane …er, proposing to Rachel with a Neil Lane diamond ring, but he still doesn’t buy this whole reality TV marriage proposal thing, which frustrates Rachel. In her defense, boy, what show do you think you signed up for? Peter tells Rachel that he is in love with her, but admits that he’s not ready to ask her to marry him, but doesn’t want to stop being with her. They have a tough talk with lots of crying and it finally wears Peter down and he says he will ask her to marry him to prove to her that he does not want to lose her now, which is … well, not very romantic either. She points out that it’s a pretty lame line of reasoning. They cry, they argue in a circle, and then Rachel is done. Peter cries as girls and boys across America smash their faces into the TV trying to comfort him. It’s sad, but this cute, well-matched couple was basically done in by the very reality show they signed up for. Rachel kind of meanly tells him that this process wasn’t for him and he doesn’t bother apologizing for liking her in a non-reality TV way.

On the live show, Rachel tells Chris, “I cried my eyelashes off.” Then Peter comes out and he still can’t believe that she chose Bryan. Honestly, though, no one can. That’s too much for Rachel, though, and she waves him off the stage with a Boy, Bye and tells Chris Harrison that she is not living a mediocre life, as Peter foretold that she would if she picked Bryan, but is instead living her Oprah Winfrey-approved “best life.” No one in America buys this, not even Bryan’s mom.

And The Winner Is…

Now that there is only man left in Rachel’s life it’s pretty clear what’s going to happen—unless Bryan’s mom comes out and tackles the Neil Lane diamond ring out of his hand. Bryan picks a diamond ring, walks up a long hill to a castle where Rachel waits with a rose in hand. He says a few words in Spanish and English, she says she sees her forever. He drops to one knee, she pretends she is shocked, and Rachel gets her fairy tale ending. 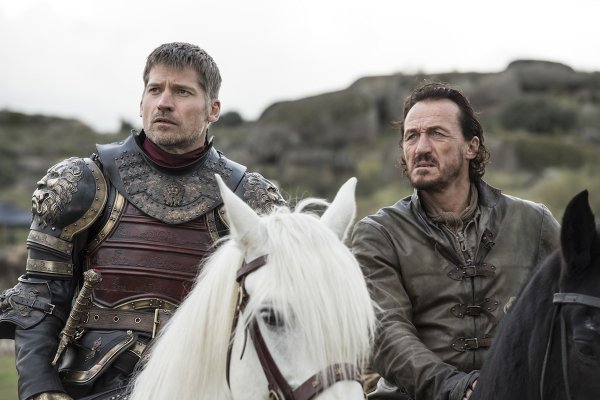 How the Real History of Mercenary Armies Might Hint at What's Next on 'Game of Thrones'
Next Up: Editor's Pick