Musicians such as Ed Sheeran, Kate Tempest and Fossils will play small concerts in ordinary peoples’ homes in two hundred cities around the world next month, as part of Amnesty International’s Give a Home concert series.

The one-day program, announced the same day as World Refugee Day, takes place on Sept. 20. The collaboration between Amnesty International and music promoter Sofar Sounds puts artists into the homes of music fans who applied to host the gigs, in order to help raise the profile of those who have been forced to flee their homes.

Canadian pop-duo Faarrow are among the thousands of musicians taking part, and will be visiting a home in downtown L.A to play stripped-back version of their songs. The sisters Siham, 29, and Imam Hashi, 28, are refugees themselves, having left Somalia for Toronto after the civil war broke out in 1991.

Now they feel that they have to use their platform to speak up for others who haven’t been so lucky. “People look at us like they don’t really think we’re refugees, they have this idea of what a refugee looks and sounds like,” Siham told TIME, adding that Somalia and its people are still part of their daily lives.

Another big name on the lineup is American-Mexican band Jesse & Joy. They are playing in Mexico City, where they have worked previously with Mexican immigrant communities. “If we’re all in this world we should all be welcome into a home. Everybody deserves a home,” said 31-year-old Joy.

Ed Sheeran — possibly the biggest name in the program — will be playing in Washington, and Fossils are playing in Kolkata. Each of the headliners will be joined by refugee groups, such as the Orchestra of Syrian Musicians, which is scheduled to perform in London. Hamsa Mounif, 30, worked as a singer for the orchestra after studying music for five years at the Higher Institute of Music in Damascus. The orchestra features singers alongside traditional strings and percussion, as well as traditional instruments like the ney — a type of flute.

Many members of that orchestra, Mounif included, used to play for the Syrian National Orchestra for Arabic Music in Damascus Opera House. Today, she says, the civil war has left the the artistic scene neglected and underfunded. “People need more food,” she said. “They don’t care about arts and music. Unfortunately when the war stops the last thing to fix will be the arts.”

Mourif left Syria shortly after the orchestra toured Europe last year with Damon Albarn’s music collective, Africa Express, adding that it’s not impossible to live in Damascus but wanted to move to the U.K. to follow her dream of being a professional singer. She combated the loneliness of arriving in a new country by taking English classes and then singing with the college for International Women’s Day.

While she is now resident in the British city of Leicester, other orchestra members are scattered around the U.K., which makes rehearsals for events like Give a Home very difficult. But being together and performing, she said, allows them to remember Syrian culture. “A lot of people come to me and say we cannot understand one word but we can feel what you mean. You can’t translate the music – it is our job to make people feel what we think,” she said.

Mounif is excited to return to London to sing, adding that performing at the Give a Home will allow her and her colleagues to present a different experience of Syria. “Of course we have a war,” she said. “We are suffering. I feel like it’s my responsibility to make them feel happy.”

You can apply for tickets for Give a Home here. 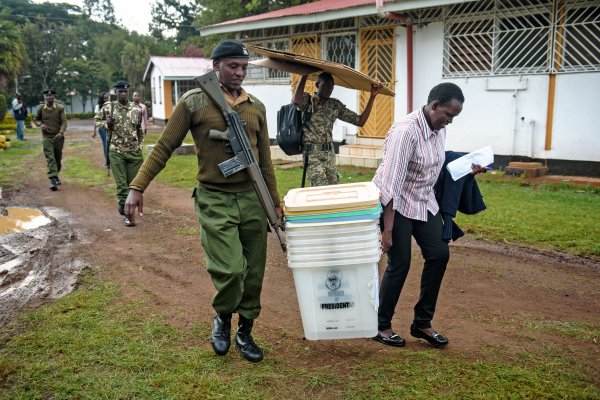 Kenyans Head to the Polls Amid Fears of Violence
Next Up: Editor's Pick