Taylor Swift Sued a DJ for Allegedly Groping Her. Here's What to Know About the Trial

Taylor Swift is expected to testify in court this month against a former radio host who she claims groped her.

The pop star has accused David Mueller of reaching under her dress and grabbing her buttocks while they posed for a photograph together backstage at one of Swift’s concerts four years ago. Mueller has denied the claim, which he said led to him getting fired. He sued Swift, prompting her to countersue.

Jury selection in the civil trial began Monday, and opening statements were set to start Tuesday. Here’s what to know about the groping case as it unfolds in federal court in Denver:

What does Taylor Swift claim?

Swift claims Mueller sexually assaulted her during a meet-and-greet at the Pepsi Center in Denver before her concert at the venue on June 2, 2013. She said it happened as they were posing for a photo. “He took his hand and put it up my dress and grabbed onto my ass cheek,” the singer alleges, according to the Associated Press. “It was not an accident. It was completely intentional, and I have never been so sure of anything in my life.”

Swift was “surprised, upset, offended and alarmed” immediately following the alleged groping, according to her lawsuit. “This event caused her extreme anxiety because she did not know that Mueller, or anyone else, would grope her private and intimate body part, during an event to which she opened access to her fans and radio personnel as a show of her appreciation,” the lawsuit says.

After the photo was taken, Swift alerted her security staff, who confronted Mueller about it. A member of Swift’s security team also told Mueller’s boss at KYGO radio station what happened, and Mueller was fired, according to a lawsuit he filed.

How did David Mueller respond?

Mueller, who was with his then-girlfriend at the concert, said he “didn’t do anything” and urged Swift’s security team at the time to call the police. Swift’s team did not alert authorities, and Mueller later sued Swift for $3 million in damages, claiming her accusations were false and cost him his job.

Mueller’s girlfriend, Shannon Melcher, was also in the photo with him and Swift. The couple had exchanged pleasantries with Swift before huddling for a photo, according to Mueller’s lawsuit against the singer. The suit says Mueller complimented Swift on her “patience and sincerity with her fans” as they met. He says Swift then suddenly announced it was time to take the picture, forcing him to jump into the photo “at the last second.” After the photo, Mueller says Swift shook his hand and hugged Melcher, thanking them both for visiting.

Mueller, of Colorado, was 51 at the time of the incident, and Swift, of Tennessee, was 23.

What does the photo show?

The court has sealed the photo at the center of the groping case, but TMZ previously published the image in November 2016. The photo shows Swift between Melcher and Mueller. All three are smiling. Mueller’s right hand is somewhere behind Swift, slightly below her waist. The photo does not clearly show whether he groped Swift.

When is Taylor Swift testifying?

It’s unclear when Swift will take the stand. Her attorney, Douglas Baldridge, did not immediately respond to a request for comment Monday. The AP says the trial could last about two weeks. 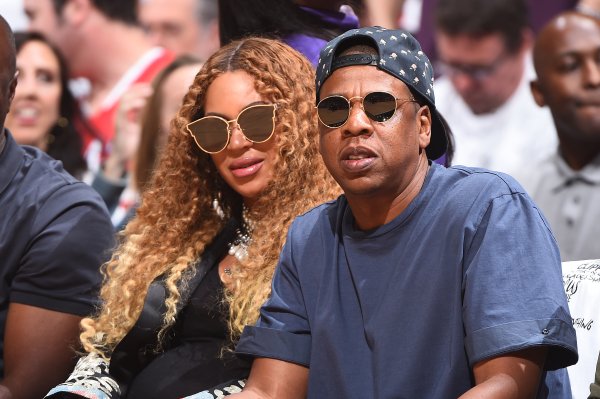 Beyoncé and JAY-Z Went on a Date You Could Totally Afford
Next Up: Editor's Pick