Littlefinger spoke to Bran Stark for the first time in Sunday’s episode of Game of Thrones, but the conversation didn’t exactly go very well. After Littlefinger gifted Bran — or as he now thinks of himself, the Three-Eyed Raven — with the Valyrian steel dagger used by the cutthroat who tried to assassinate him, the young Stark son asked if he knew who the blade had belonged to.

“No. That very question was what started the War of the Five Kings,” Littlefinger replied. “In a way, that dagger made you what you are today. Forced from your home, driven out to the wilds beyond the Wall…To go through all of that and make your way home again only to find such chaos in the world, I can only imagine—”

“Chaos is a ladder,” Bran interrupted.

The comment seemed to be a reference to a season three discussion between Littlefinger and Varys.

“Chaos isn’t a pit. Chaos is a ladder,” Littlefinger told the Spider after he handed Ros over to Joffrey for double-crossing him. “Many who try to climb it fail and never get to try again. The fall breaks them. And some, are given a chance to climb. They refuse, they cling to the realm or the gods or love. Illusions. Only the ladder is real. The climb is all there is.”

The remark clearly gave Littlefinger pause, as it seemed to show that Bran may know things that could create problems for him.

Now all that remains is for Bran to let Sansa and Arya in on these secrets. 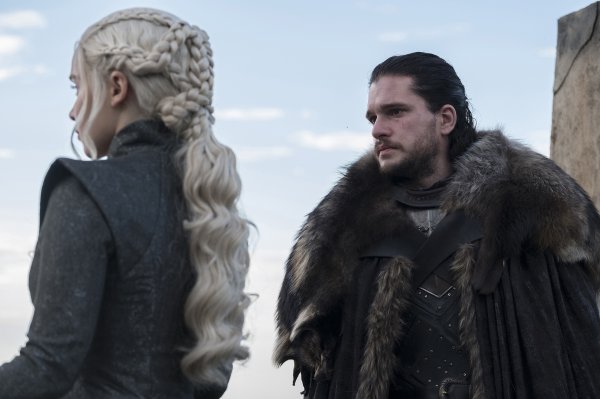 It's Getting Harder to Deny the Jon Snow-Daenerys Connection
Next Up: Editor's Pick