A far-right activist group’s mission to disrupt the flow of migrant boats across the Mediterranean hit another snag this weekend when Tunisian fishermen blocked its charter, the C-Star, from docking at the southeastern port of Zarzis.

The France-based Generation Identity (GI) accuses NGO rescue ships of colluding with people smuggling operations out of Libya, Agence France Presse reports. But humanitarian groups say that the group’s attempt to turn migrant boats back to Libya is a dangerous publicity stunt.

“If they come here we’ll close the refueling channel,” Chamseddine Bourassine, the head of a local fishermen’s organization, told AFP. “It is the least we can do given what is happening out in the Mediterranean,” he added. “Muslims and Africans are dying.”

On Saturday, the C-Star briefly tailed a vessel operated by a French NGO that was running search and rescue operations in an area notorious for migrant boat sinkings. Anticipating the blockade, the C-star reportedly sailed north up the Tunisian coast, where it is expected to attempt to refuel at another Tunisian port Monday.

This weekend’s blockade is just the latest challenge to GI’s “Defend Europe” mission. The boat was held up for a week in the Suez Canal, and in Cyprus some of its crew members jumped ship, attempting to seek asylum in Europe.

Read More: Amnesty: 2017 on Course to Be Deadliest Year Yet for Refugees Crossing the Mediterranean

Amid criticism of the European Union for failing to stem the dangerous sea voyages, NGOs and privately-funded boats have joined multinational search and rescue operations. Some of those efforts have also come under criticism, as some claim the rescue operations exacerbate trafficking by providing a safe route into Europe. Such groups are responsible for rescuing about one third of nearly 100,000 people picked up this year. 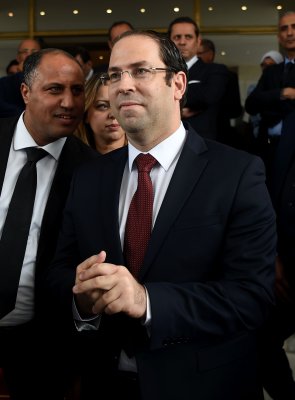 Q&A: Tunisia's Youssef Chahed on Building a Democracy That Endures
Next Up: Editor's Pick