What Solar Eclipses Have Taught Us About the Universe

Total solar eclipses like the one that will cross the U.S. on Aug. 21 have captured the attention of astronomers throughout history — and have often led to advances in our understanding of how the universe works.

Astronomers have been studying solar eclipses for centuries. In the late 16th and early 17th centuries, Danish astronomer Tycho Brahe and his apprentice German astronomer Johannes Kepler studied eclipses to try to arrive at a rough estimate of the moon’s diameter.

In the 19th century, eclipse observations got even more interesting, thanks in large part to advances in scientific instruments like telescopes and spectrometers, devices that let scientists analyze the chemistry of stars and distant planets. In 1868, French astronomer Jules Janssen and English astronomer Norman Lockyer were observing separate solar eclipses when they discovered a new element, which they named helios, after the Greek word for “sun.” Today, it’s known as helium.

During an eclipse in 1879, American astronomer Charles Augustus Young and Scotland-born astronomer William Harkness both thought they had discovered another new element. But they had actually observed exceptionally hot iron in the sun’s corona, the sun’s outer atmosphere. This was the first indication that the corona is millions of degrees hotter than the sun’s surface, a mystery that puzzles astronomers to this day.

Perhaps the most interesting eclipse-based discovery came in 1919. Albert Einstein’s theory of general relativity was still being met with skepticism. Under this theory, big gravitational masses like stars and planets warp the fabric of space-time, bending light as it travels through the universe. Einstein didn’t have a way of proving it, but luckily, Sir Frank Watson Dyson, the Astronomer Royal of Britain at the time, a senior post in the Royal Households of the U.K., came up with a solution. He plotted the positions of stars that would be near the sun’s limb, or edge, before a solar eclipse, then measured their positions again during the eclipse. He found that the stars’ positions had changed. The only explanation was that the mass of the sun was bending space-time and curving the stars’ light. They looked to be in different positions, but it was really an effect of the sun’s mass. It was proof Einstein was right.

So when you watch the eclipse on Aug. 21, which will be visible in parts of 14 states as a total solar solar eclipse and in the rest of the country as a partial solar eclipse, it’s a good moment to remember the cosmic event’s history of illuminating our place in space.

Amy Shira Teitel is a spaceflight historian who will co-host TIME’s livestream of the solar eclipse on Aug. 21 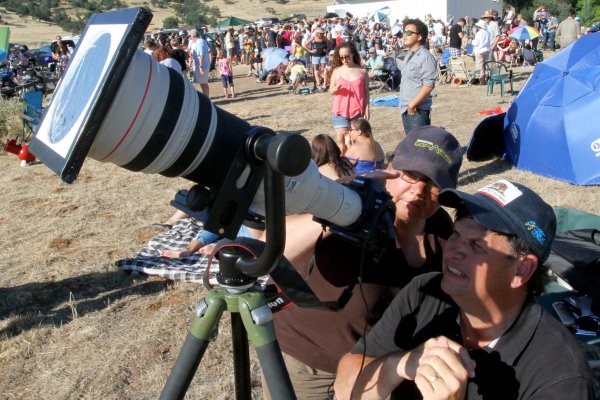 How to Photograph the 2017 Solar Eclipse
Next Up: Editor's Pick