The White House Used This Moment as Proof the U.S. Should Cut Immigration. Its Real History Is More Complicated

This week, as President Trump comes out in support of a bill that seeks to halve legal immigration to the United States, his administration is emphasizing the idea that Americans and their jobs need to be protected from all newcomers—undocumented and documented. To support that idea, his senior policy adviser Stephen Miller has turned to a moment in American history that is often referenced by those who support curbing immigration: the Mariel boatlift of 1980. But, in fact, much of the conventional wisdom about that episode is based on falsehoods rooted in Cold War rhetoric.

During a press briefing on Wednesday, journalist Glenn Thrush asked Miller to provide statistics showing the correlation between the presence of low-skill immigrants and decreased wages for U.S.-born and naturalized workers. In response, Miller noted the findings of a recent study by Harvard economist George Borjas on the Mariel boatlift, which contentiously argued that the influx of over 125,000 Cubans who entered the United States from April to October of 1980 decreased wages for southern Florida’s less educated workers. Borjas’ study, which challenged an earlier influential study by Berkeley economist David Card, has received major criticisms. A lively debate persists among economists about the study’s methods, limited sample size and interpretation of the region’s racial categories—but Miller’s conjuring of Mariel is contentious on its own merits.

The Mariel boatlift is an outlier in the pages of U.S. immigration history because it was, at its core, a result of Cold War posturing between the United States and Cuba.

Fidel Castro found himself in a precarious situation in April 1980 when thousands of Cubans stormed the Peruvian embassy seeking asylum. Castro opened up the port of Mariel and claimed he would let anyone who wanted to leave Cuba to do so. Across the Florida Straits, the United States especially prioritized receiving people who fled communist regimes as a Cold War imperative. Because the newly minted Refugee Act had just been enacted—largely to address the longstanding bias that favored people fleeing communism—the Marielitos were admitted under an ambiguous, emergency-based designation: “Cuban-Haitian entrant (status pending).” At this week’s press conference, Miller avoided discussions of guest workers because they enter under separate procedures. It’s important to note, however, that the Marielitos also entered under a separate category.

In order to save face, Castro put forward the narrative that the Cubans who sought to leave the island were the dregs of society and counter-revolutionaries who needed to be purged because they could never prove productive to the nation. This sentiment, along with reports that he had opened his jails and mental institutes as part of this boatlift, fueled a mythology that the Marielitos were a criminal, violent, sexually deviant and altogether “undesirable” demographic.

In reality, more than 80% of the Marielitos had no criminal past, even in a nation where “criminality” could include acts antithetical to the revolutionary government’s ideals. In addition to roughly 1,500 mentally and physically disabled people, this wave of Cubans included a significant number of sex workers and queer and transgender people—some of whom were part of the minority who had criminal-justice involvement, having been formerly incarcerated because of their gender and sexual transgression.

Part of what made Castro’s propaganda scheme so successful was that his regime’s repudiation of Marielitos found an eager audience in the United States among those who found it useful to fuel the nativist furnace. U.S. legislators, policymakers and many in the general public accepted Castro’s negative depiction of the Marielitos as truth. By 1983, the film Scarface had even fictionalized a Marielito as a druglord and violent criminal.

Then and now, the boatlift proved incredibly unpopular among those living in the United States and is often cited as one of the most vivid examples of the dangers of lax immigration enforcement. In fact, many of President Jimmy Carter’s opponents listed Mariel as one of his and the Democratic Party’s greatest failures, even as his Republican successor, President Ronald Reagan, also embraced the Marielitos as part of an ideological campaign against Cuba. And the political consequences of the reaction to Mariel didn’t stop there: the episode also helped birth the English-only movement in the United States, after Dade County residents voted to remove Spanish as a second official language in November of 1980. (The new immigration proposal that Trump supports would also privilege immigrants who can speak English.)

While the Mariel boatlift—with its massive influx of people in a short period of time—may appear to be an ideal case study for economists to explore whether immigrants decreased wages for U.S.-born workers, its Cold War-influenced and largely anomalous history makes it less so.

During this week’s press conference, Miller later told Thrush that, more than statistics, we should use “common sense” in crafting our policies. As the case of the Mariel boatlift shows, so-called common sense can be inextricably informed by ulterior motives, prejudice and global political disagreement. When history is used to inform policy decisions, this too must be factored. 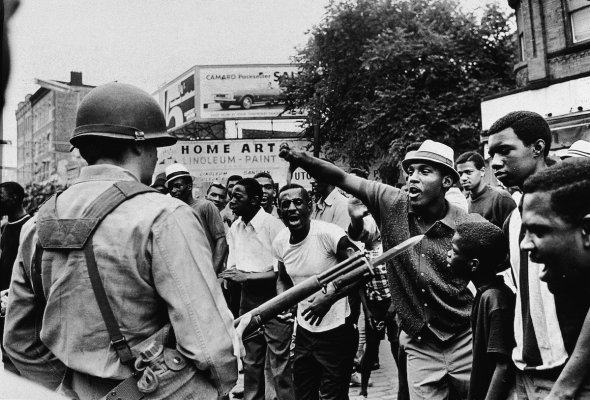 A Riot Started in Newark 50 Years Ago. It Shouldn't Have Been a Surprise
Next Up: Editor's Pick