Jasso is Silver Professor and Professor of Sociology at New York University; Rosenzweig is the Frank Altschul Professor of International Economics and Director of the Economic Growth Center at Yale University; both were Research Directors of the Select Commission on Immigration and Refugee Policy.

In reassessing the criteria by which immigrants are selected into the United States, it is important to have a full understanding of the current immigrant selection system. Under current law, it is not the government that determines who becomes a U.S. immigrant. Yes, immigration laws set the criteria for whom is eligible to be admitted. But within the lawful categories, private U.S. citizens (or legal permanent residents) determine who becomes a U.S. immigrant. If the current system brings in low-skilled immigrants, then that is who U.S. citizens and residents prefer.

President Donald Trump has endorsed a Senate bill that would halve legal immigration within a decade by stopping legal residents from bringing some categories of family members into the country, in favor of “skilled” immigrants. The intent is to “reward education, entrepreneurial initiative, and previous achievement.” Instead, this proposal reveals a fundamental misunderstanding of how the U.S. immigration system actually works and how it actually fosters skills within the American workforce. First, education upon entry is a poor metric for predicting subsequent productivity in the US workforce — and even then there is not much difference in the education of people who come under many family-based visas and skill-based visas. When you look at measures of productivity over time, the gap narrows even more. This is not to mention the effect on the attractiveness of a U.S. job offer to potential skilled immigrants of prohibiting them from reuniting their families in the U.S.

In short, the proposed new policies may have the unintended consequence of reducing skilled immigration. In full…

Under the current system, even sponsors of family immigrants favor the skilled. The difference in skill levels between employment-based immigrants and family-based immigrants at the time of immigration is much less than is commonly believed, and the difference in the longer-term success in the United States of those who are brought in based on employment criteria and those sponsored via family ties narrows over time.

The three main categories of sponsors of U.S. immigrants are employers, relatives of foreign-born family members, and citizens and residents who marry a foreign-born person. Each group has its own interests: Employers want to fill an immediate job vacancy. Family sponsors are concerned about the longer-term well-being of those they sponsor.

The concern of family members for the general welfare of those they sponsor is not just based on familial altruism — under U.S. immigration law, sponsors of immediate family members are required to have a fiduciary interest in the economic success of those for whom they petition. The U.S. citizen sponsor of a family immigrant is contractually responsible for the immigrant’s financial support until the immigrant either becomes a U.S. citizen or can be credited with 40 quarters of work (about ten years). Thus, family immigrants who subsequently become unemployed or leave the workforce have the support of their sponsor — in job search or retraining — but employment-based immigrants in the same situation may have no one to fall back on. U.S. citizens are thus incentivized to select family members based on how they will fare in the United States economically. Family-based immigrants have a guaranteed support system that does not make use of any public funds.

Unlike for illegal immigrants, data exist on the skill levels and employment of legal immigrants. The first round of the New Immigrant Survey describes the characteristics of the full set of immigrants who obtained their green card in 2003 by visa type. In this cohort, the average schooling level of immigrants who had employment visas, including those who were petitioned for a specific job and their immediate family members they brought with them, was 15.4 years (15.6 years for those who qualified for the job). The largest category of family immigrants for many years (24–25% of all new immigrants and 37–39% of all new family immigrants in 2013–‘15) consists of immigrants who marry U.S. citizens. In these marital matches, like most marital matches, the foreign-born spouses are likely to be similar to the U.S. citizens they marry. Almost half of the sponsors of spouse immigrants are native-born U.S. citizens in the 2003 cohort, and the average schooling level of the immigrants they sponsor is 13.5 years — still within the range of a college education.

Skill at entry can give a misleading picture of an immigrant’s subsequent contributions to the U.S. economy. Based on a study of the complete cohort of new immigrants in 1977 and their subsequent naturalization records up through 1990, we have found that skill, as measured by the average earnings of the occupation of the immigrant, declined on average (due to shifting to lower-earning occupations) for those brought in based on employment criteria and skill at entry, while family immigrants upgraded their skill on average. Thus, the difference in skills narrowed over time.

The current immigration system emphasizing family-based immigration thus is not a system that significantly favors unskilled immigration. It is a system that places responsibility, including financial responsibility, for immigration in the hands of private U.S. citizens, who have an interest in individual immigrant success and who are highly informed about who they bring in, rather than in the hands of government bureaucrats and politicians or based on rigid formulae making use of limited information.

Finally, debates about the selection criteria of U.S. immigration law often see family-based and skill-based criteria as mutually exclusive. They are not. Indeed, more than half of the visas reserved for employment are taken up by the immediate family members of those who are screened for jobs or skill. Clearly, those immigrants with job offers would not have accepted them if they could not bring their immediate family. Similarly, given the observed interest of immigrants in bringing in their relatives subsequent to their immigration, despite onerous financial requirements, one can easily imagine that U.S. job offers will be less attractive to the foreign-born if they are unable to subsequently sponsor family members. A balanced immigration system that includes both skill and family-based criteria may be necessary for attracting the best and the brightest to the United States. 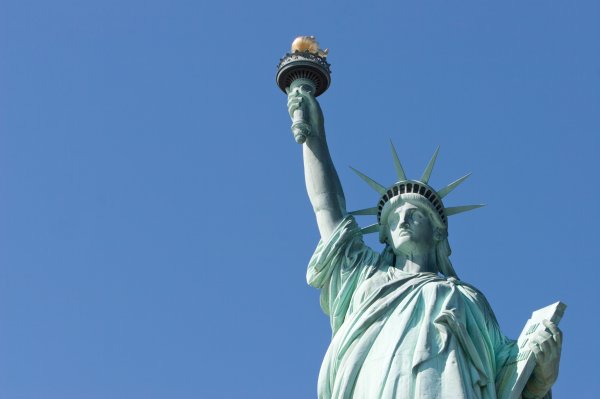 The Story Behind the Statue of Liberty Poem
Next Up: Editor's Pick