A woman dries a small quantity of sorghum on May 31, 2017, outside her house in Panthau, Northern Bahr al Ghazal, South Sudan.
Albert Gonzalez Farran—AFP/Getty Images
Ideas
By Liz Schrayer
Schrayer is President and CEO of the U.S. Global Leadership Coalition.

If you were a teenager in the ‘80s, you remember “We Are the World” — a song that became the fastest-selling American pop single in history. It’s hard to forget the iconic images of Michael Jackson, Lionel Richie, Tina Turner, Bob Dylan, Cyndi Lauper and Bruce Springsteen, among others, wearing their big headphones and singing together to raise awareness about a hunger crisis in Africa that would claim the lives of roughly one million people that decade.

I still remember sitting with my friends — like so many other teenagers — moving the needle on our record players over and over again, belting out the words as we became aware of a place we had never seen and a tragedy we had never known. Millions of dollars were raised for famine relief.

Sadly, the reality of today is that there is far too much competing noise for a simple 45 record to break through about an even more widespread famine. A recent poll by the International Rescue Committee found that an astounding 85% of Americans are unaware that 20 million people — more than the populations of New York City, Los Angeles, Houston, Chicago and Philadelphia combined — are living on the verge of starvation in just three African countries plus Yemen.

We have news on 24 hours a day. We live with unprecedented connectivity. And yet we don’t even know that simple fact. That is disturbing.

But that same poll also bears some good news: Once they learn about the famine crises, the vast majority of millennials see it as one of the world’s most pressing global issues — not dissimilar to my generation when we heard that powerful song. And history has shown that Americans overwhelmingly want to help at time of need, whether facing a daunting humanitarian crisis on our shores or abroad. It’s in our DNA. More than half of American families, for example, contributed to the Haiti relief efforts after the 2010 earthquake — more people than tuned in to the Super Bowl during its peak viewership — an astonishing display of America at its best.

But with so few even aware of one of the most devastating humanitarian emergencies since World War II, the reality of both the promise and the limits of America as that “shining city on a hill” is at our doorstep once again.

Thankfully, there are leaders and lawmakers stepping up. The UN’s World Food Program chief David Beasley and Ambassador Nikki Haley have been raising the alarm bells in Washington and around the world as the crisis has escalated. On Capitol Hill, Senators Todd Young and Ben Cardin led a bipartisan effort earlier this year to urge a forceful response to this looming humanitarian emergency — and Congress and the Administration recently announced hundreds of millions of dollars in emergency funding.

Businesses are also leveraging their unique capabilities, tools and expertise for the fight in new forms of public-private partnerships. For example, over the past two and a half years Procter & Gamble and its NGO partners have distributed enough of their water purification packets to provide 400 million liters of clean drinking water in key African countries. The company has plans to support the distribution of another 200 million liters of water by emergency relief partners in the fight against famine over the next six months.

Despite these efforts, we are running the risk of allowing a major humanitarian crisis to unfold on our watch. In the five months since UN Secretary General Antonio Guterres raised the alarm and made an emergency appeal for $6.1 billion in famine aid, less than half of that money has been raised. And the problems are only getting compounded. In Yemen, an unprecedented cholera outbreak is wreaking havoc. In South Sudan, political violence remains endemic, and Boko Haram is still inflicting terror on hundreds of thousands in parts of Nigeria. These four famines are unlike previous ones in that man rather than nature have largely driven them — through political violence and failing governments. But that also means that we have the power to be part of the solution.

Now it’s time to use our voices. Donate to the Global Emergency Response Coalition — the NGOs on the front lines working to literally save lives. Write to Congress, thanking them for providing almost $1 billion in relief funding and urging them to stay focused on this emergency. And perhaps most of all, get others involved by posting a message on Facebook or Twitter, sharing this story and the facts about the famine crises where nearly 1.4 million children are at imminent risk of starvation.

Lawmakers and ambassadors alongside humanitarian and business leaders may not be putting on headphones to sing a pop song, but they are belting out a message loud and clear. My guess is that none of them sing quite as well as Bruce Springsteen or any of the 1985 originals, but these modern day voices are passionate, knowledgeable and smart. And it’s time we listen to their song — and act. 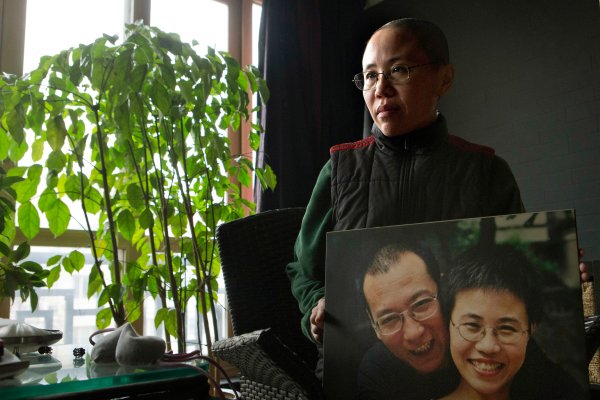 An Open Letter to Liu Xia, Widow of Liu Xiaobo
Next Up: Editor's Pick