'I Can't Help You Anymore Being a Democrat.' West Virginia Governor Switches Parties at Trump Rally

West Virginia Governor Jim Justice announced Thursday at a rally for President Donald Trump that he was shifting party allegiances and becoming a Republican.

“Today, I will tell you as West Virginians, I can’t help you anymore being a Democrat governor,” Justice said in Huntington, West Virginia, flanked by President Trump. “So tomorrow, I will be changing my registration to Republican.”

A Democratic official told TIME Justice had not told his staff, the West Virginia Democratic Party, or the Democratic National Committee of his decision to switch parties.

President Trump had teased to reporters earlier Thursday that a “big announcement” was taking place at his rally. The New York Times reported Thursday afternoon that Justice, who was elected governor of the state last year, would reveal at the rally that he was switching parties.

This is not the first time Justice has switched parties. In Feb. 2015, Justice left the Republican party to become a Democrat, according to the Wall Street Journal. (As of Thursday afternoon, he was still listed as a registered Democrat).

Justice, who was a coal executive before he was elected governor, had always staked his position as a moderate Democrat, refusing to endorse Hillary Clinton during last year’s presidential election — explaining that he was opposed to her views on coal mining.

On Thursday, Trump praised Justice at the rally, saying “our agenda rises above left or right.”

The president won West Virginia in the 2016 election with nearly 70 percent of the vote. The state has one Republican senator, Shelley Moore Capito, and one Democrat, Joe Manchin.

Manchin released a statement Thursday ahead of the president’s visit expressing hope that the he could work with Democrats in a bipartisan fashion, and praising Trump for the White House’s dedication to combatting the opioid addiction crisis, which has hit West Virginia particularly hard.

Justice’s defection to the Republican party means that out of the country’s 50 governors, only 15 — 30 percent — are Democrats. 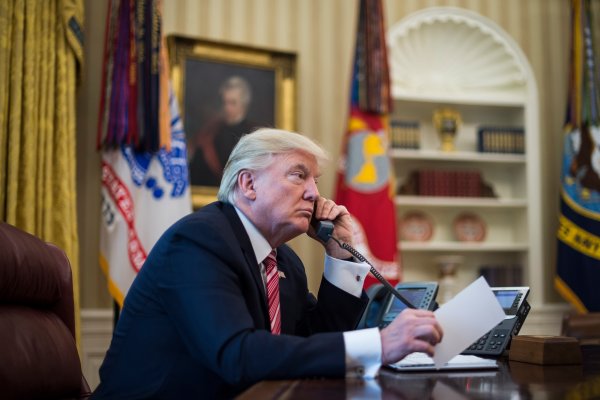 Why We Can't Stop Reading Trump Transcripts
Next Up: Editor's Pick