Here's Why the NAACP Issued Its First-Ever Travel Advisory for a U.S. State

When the Missouri state legislature passed Senate Bill 43 in June, Missouri NAACP President Nimrod Chapel was at a loss. He had met with lawmakers and testified in opposition to the bill, which raises the legal burden needed to sue businesses for discrimination on the basis of race, religion, or gender, but to no avail.

Chapel decided to take an unconventional step: the Missouri NAACP issued a travel advisory, warning visitors that their civil rights could be violated if they enter the state. Last week, the national convention of the organization officially recognized the warning, the first of its kind from the group.

The advisory aims to make visitors aware of a string of troubling events in Missouri: in May, an African-American man died while being held in jail; he had never been arrested. Threats of violence and discrimination had gone unaddressed on school campuses in the state, the NAACP said. And a 2016 report from the State Attorney General’s office found that African-Americans were stopped by traffic officers 75% more often than Caucasian drivers, and at a rate disproportionate to their makeup in the state’s population.

“That’s a significant problem, if you’re a person and can’t travel in a state that ostensibly your tax dollars are used to pave the road in,” Chapel said.

Usually issued by organizations like the State Department, travel advisories are most frequently associated with natural disasters and political turmoil or violence—warning travelers at home and abroad to be extra alert or avoid dangerous areas altogether. But there is some precedent for civil rights organizations to take the precaution as well: the ACLU issued an alert for Texas in May in response to passage of a state law that allows police officers to examine the immigration status of people stopped for traffic violations.

Chapel says that the advisory is a unique tool for making people aware of these events and giving them the opportunity to “simply decide what level they want to participate in.” He believes it’s part of the NAACP’s “duty” to call attention to what he sees as increased risk for discrimination in the state.

“Just like if we were riding along a road and we saw a bridge or we saw a road that’s been partially washed out … it’s up to the person to decide how they want to negotiate that thoroughfare,” said Chapel. “And I think that that’s the same way that people ought to think about Missouri in this regard.”

The text of the advisory itself urges visitors to exercise “extreme caution” in the state, to warn others about potential civil rights violations, and to “file and seek help on any existing claims for discrimination” before SB43 goes into effect on August 28.

Supporters of the bill say that the measure will help cut the debilitating costs incurred during discrimination suits, and help reduce “frivolous lawsuits” in the state. State Sen. Gary Romine, who sponsored the bill, said the legislation brings Missouri’s laws into closer alignment with other state and federal regulations.

Because the bill has already been passed, said Chapel, there’s little more the NAACP can do now to oppose it—but the travel advisory provides a kind of work around, a way of signaling the group’s concerns and raising awareness in hopes of eventually getting the bill repealed.

“If we keep denying what’s happening here in Missouri … Missouri will not be the state that anyone wants it to be,” he said. 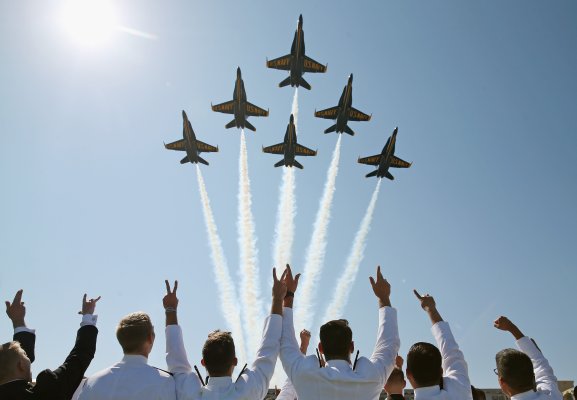 Most Americans Are in Favor of Allowing Transgender People to Serve in the Military, Poll Finds
Next Up: Editor's Pick