Why People Used to Be Afraid of Solar Eclipses

Americans eagerly anticipating the first total solar eclipse visible in the contiguous U.S. since 1979 — and the first to cross the country from coast to coast in 99 years — may know well know that what they’re watching is the moon simply passing in front of the sun. But even so, as long as eclipses have occurred, humans have interpreted them as a sign of something.

As TIME editor-at-large Jeffrey Kluger explains in the above video, the Lydians and the Medes ended a war in 585 B.C. because they took a solar eclipse eclipse as a sign of heavenly disapproval. The Roman author Pliny the elder drew a line from the eclipse of 59 A.D. to towns being struck by lightning. Eclipses were even thought to have influenced tragic events that happened years later, as was the case with the death of King Henry I in 1135, two years after an eclipse.

Some may also have considered a 1652 total solar eclipse to be partly responsible for the Great Plague of London and the Great Fire of London about a decade later, says John Dvorak, a planetary geophysicist and author of Mask of the Sun: The Science, History, and Forgotten Lore of Eclipses. Harvard’s Commencement Day in 1684 was moved up a day because a total solar eclipse would be visible from Martha’s Vineyard, though university president John Rogers said that the decision was a matter of convenience rather than superstition. The 52-year-old administrator would, eerily, end up dying on the day of the eclipse from what was described back then as a “visitation of sickness,” and it was later announced that he passed as the sun was “beginning to emerge out of a Central Ecclipps.”

Yet, even during what were perceived to be highly superstitious times, ancient astronomers could already believe there must be something more to the phenomenon.

Around 500 B.C., people were staring to talk about eclipses having natural causes rather than supernatural ones, says Tyler Nordgren, an astronomer and professor of physics at the University of Redlands. Ancient Greek historian Herodotus claimed that the philosopher Thales was able to predict when a total solar eclipse would occur (though how he would have done that is not known). To top it all off, “Aristotle was looking at the shadow that the Earth cast on the Moon during a lunar eclipse, noticing that shadow was always circular and saying that the Earth must be a sphere,” Nordgren says.

One of the scholars who epitomizes the shift from superstition to science was Edmund Halley, now known for Halley’s Comet. In 1715, he published a broadside arguing that people shouldn’t be afraid of an eclipse, after a prominent mathematician had published an apocalyptic-sounding pamphlet claiming an eclipse that year “foreshews the Destruction of the Fruits of the Earth, the Scarcity of Corn and Fruit, and a Danger of a Raging Pestilence.”

In response, Halley used Isaac Newton’s theory of gravity to produce one of the first maps of the path of an eclipse and noted that the natural phenomenon was not “portending evil to our Sovereign King George.” He also described the way the eclipse would work in a manner that 18th-century readers could understand — and that still works today.

“An Eclipse of the Sun,” he wrote, “proceeds only from natural Causes; and is nothing else but the direct [i]nterposition of the Body of the Moon between our Sight and the Sun.” 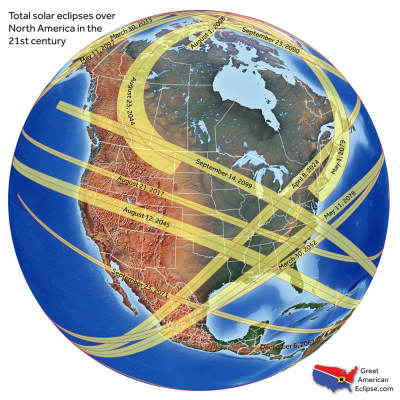 Here’s Where You Can See Every Total Solar Eclipse for the Next 50 Years
Next Up: Editor's Pick