Gandhi Was Arrested 75 Years Ago. Read TIME's Original Report on What Happened

They came for Mohandas Gandhi — the Mahatma, leader of the push for Indian independence from the British Raj — early in the morning.

Shortly before, his Indian National Congress party had met to decide whether to approve a plan to rebel, peacefully, against British rule in India, rejecting the U.K.’s proposed plan to give India dominion status — less than complete independence — after World War II came to an end.

When the party voted to approve the “Quit India” resolution, demanding immediate independence and launching a satyagraha civil-disobedience campaign in support of that goal, the British responded by going after Gandhi. As TIME reported, that arrest, though not Gandhi’s first, served as a spark to tip the passive resistance he favored into violent reaction:

As word of the arrest spread, so did the unrest. The British Raj responded by tightening its already strict control. Gandhi was accused — with the help of documents that had been seized from the Congress party headquarters — of supporting the Japanese in the war, while his supporters claimed that those documents had been “misinterpreted.”

Meanwhile, the rest of the world — particularly the U.S., at that moment an important ally of the U.K. but also naturally predisposed to support colonial rebellion against that ally — watched warily. (Gandhi was released in 1944, from what would be his last stint in prison. He died in 1948.) Decades later however, when Gandhi was included in TIME’s “Person of the Century” issue, the magazine noted that the world would eventually fully take the Mahatma’s side.

“It may be that this most Indian of leaders, revered as Bapuji, or Father of the Nation, means more now to the world at large,” the story noted. “Foreigners don’t have to wrestle with the confusion Indians feel today as they judge whether their nation has kept faith with his vision. For the rest of us, his image offers something much simpler — a shining set of ideals to emulate. Individual freedom. Political liberty. Social justice. Nonviolent protest. Passive resistance. Religious tolerance. His work and his spirit awakened the 20th century to ideas that serve as a moral beacon for all epochs.” 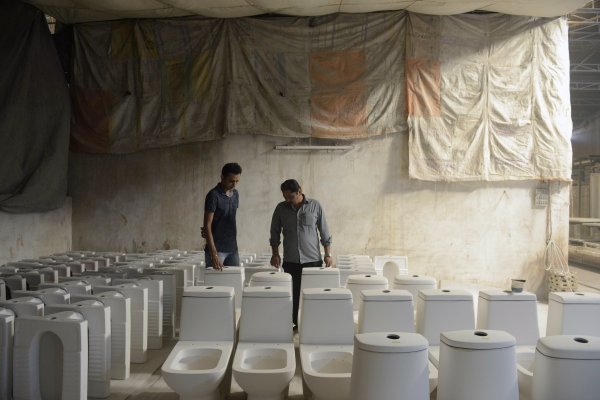 India Official: 'Sell Your Wife' If You Can't Afford a Toilet
Next Up: Editor's Pick