What to Know About the Real Crimes Behind Bonnie and Clyde

Scenes from the movie Bonnie and Clyde with Warren Beatty and Faye Dunaway. Produced by Warner Brothers Studios.
Bettmann Archive—Getty Images
By Olivia B. Waxman

Today, their names live on in headlines as nicknames for any male and female partners in crime — real or metaphorical. But, 50 years after Bonnie and Clyde stole American hearts in the movie starring Faye Dunaway and Warren Beatty, many myths about the criminal couple persist, thanks in large part to that film.

“[Clyde] fancied himself something of a latterday Robin Hood, robbing only banks that were foreclosing on poor farmers and eventually turning into a kind of folk hero,” TIME’s original review of the film declared.

However, the motives of the real Bonnie Parker and Clyde Barrow were “much more nefarious and self-serving,” says Nate Hendley, author of Bonnie and Clyde: A Biography. “In reality, they never robbed banks,” he says. “They hit up low-hanging fruit. They robbed small-town grocery stores and gas stations, where working people or poor people would [shop].”

Some of the details of the story are fairly accurately portrayed in the movie, which had its New York premiere on Aug. 13, 1967, a half-century ago this Sunday. Hendley says it’s true that Bonnie Parker was a waitress bored in a small Texas town who in 1930 found a cure for her wanderlust in Clyde Barrow, who had grown up stealing cars and had already done time in prison. It’s true that they became famous after being involved in two huge shootouts with police, most notably in Joplin, Mo., in 1933. And the law-enforcement hunt for them intensified after when police discovered what appeared to be publicity photos that the duo had taken of themselves, in which Bonnie was holding guns and smoking a cigar.

“Clyde would steal really good cars and weapons from military armories,” Hendley says, “while police in the South and Southwest were driving clunkers and sometimes didn’t have radios and telephones.”

But just how bad Bonnie was remains a matter for debate. She apparently didn’t mean for those photos to get out into the public, and Hendley says she would claim that the cigar was just a prop and that, while she was holding a gun in that photo, she didn’t actually shoot anyone. More likely, Hendley says, she was “an accomplice, reloading guns and generally helping.” Another matter up for debate is whether they were actually lovers: no one has confirmed whether the real Bonnie and Clyde “were dating or just traveling companions,” he says.

Their crime spree came to an end in 1934 after a six-month manhunt, when they were ambushed by police who had caught up with them in Sailes, La. TIME reported the following week that 167 shots were fired, with two of them killing the dynamic duo. The magazine added that police found the following poem in the couple’s car: “Now Bonnie and Clyde are the Barrow gang, / I’m sure you all have read / How they rob and steal, / And how those who squeal, / Are usually found dying or dead…”

For your security, we've sent a confirmation email to the address you entered. Click the link to confirm your subscription and begin receiving our newsletters. If you don't get the confirmation within 10 minutes, please check your spam folder.
The Dec. 8, 1967, cover of TIME.
Robert Rauschenberg

While their crime spree only lasted about two years, between Bonnie’s poetry and the photos they took of themselves, they basically invited storytellers to tell stories about them for years to come.

TIME’s original review of the film was not a good one, calling it “a strange and purposeless mingling of fact and claptrap that teeters uneasily on the brink of burlesque” with “a script that gives their characters no discernible shape” and “rides off’ in all directions and ends up full of holes.” Other critics were equally critical at the time, but the film got a rare second chance with audiences.

So, when the magazine featured Beatty and Dunaway on its cover later that year, it was as the exemplars of “New Cinema Violence.” The first review had made “a mistake” and now the film was dubbed “the sleeper of the decade,” “the best movie of the year” and “a watershed picture, the kind that signals a new style, a new trend.” It noted that it was irrelevant whether the fictional Bonnie and Clyde were like the real ones, yet argued that part of what made the movie so successful was how it turned a couple of criminals into folk heroes:

Hendley also points out that the fact that the movie portrays them in a “heroic light” makes the movie a product of its time, in that it embodies “the spirit of rebellion” of the 1960s.

“A more realistic depiction,” he says, “would have portrayed them as scumbags.” 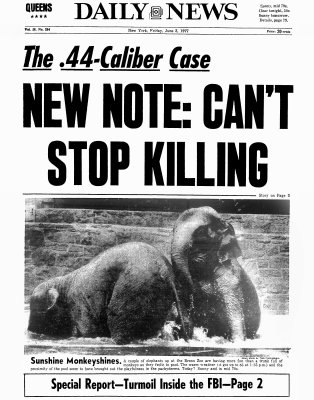 The Letters That Left New Yorkers Terrified of the 'Son of Sam'
Next Up: Editor's Pick