You can add presidential transcripts to the list of things that have experienced a “Trump bump.”

While transcriptions of conversations, interviews and speeches with the U.S. president have always been of interest, the Trump Administration has turned them into a hot commodity.

The latest example: The leaked transcripts of two phone calls Trump had with the leaders of Australia and Mexico shortly after he was inaugurated.

One reason why they’re so popular: Trump is unpredictable. Kathleen Hall Jamieson, communications professor at the University of Pennsylvania, said many readers may be drawn to the transcripts just because Trump has such a quirky way of talking.

“People are interested in his transcripts for the same reasons they’re interested in watching his speeches,” she told TIME. “The unexpected content makes him inherently interesting. With President Trump you can never be sure what is going to happen next.”

Some of those unpredictable comments are also controversial—another reason Trump transcripts do so well. In recent weeks, Trump has told the New York Times he wouldn’t have hired his attorney general if he’d known he would recuse himself from overseeing an investigation, told an anecdote about a friend who partied on yachts to a group of Boy Scouts and told a group of police not to be “too nice” to suspects in custody.

Peter Baker, chief White House correspondent for the New York Times, recently wrote an op-ed on what it’s like to interview President Trump. Of all the presidents he’s interviewed–Bill Clinton, George W. Bush, Barack Obama and now Trump–Baker says no one has rivaled the current president “in his capacity to provoke.” He added, “A product of the New York tabloid world, Mr. Trump has an unerring instinct for saying things that will produce gasps.”

Trump also regularly criticizes news coverage of his Administration, only adding interest to the source material. In February, he called news coverage of a heated phone call he had with Australian Prime Minister Malcolm Turnbull “fake news” and said the media “lied about” the conversation.

But that only drove interest in the leaked transcript, which confirmed that Trump himself called it “the most unpleasant call all day” and said their disagreement over a refugee deal was “ridiculous.”

Even without Trump’s attacks, trust in the media is at a historic low, making transcripts even more valuable. According to a Gallup poll, in 1976, 76 percent of Americans had a “great deal” or “fair amount” of trust in the media. By September 2016—the last time Gallup conducted the poll—it stood at 32 percent.

“The other phenomenon with President Trump is that there’s interest in finding out whether the private and the public individual are saying the same thing,” added Jamieson. “There have been a number of instances where he has been caught saying things that are not true. The stake in understanding what he said in private is higher as a result.”

Still, Jamieson cautioned relying on transcripts that are not publicly confirmed.

“You don’t know who made the transcripts,” she said. “There’s a somewhat naive assumption that anything is leaked and is represented as being a transcript must be a transcript. In the political climate we’re in, I wouldn’t assume that.” 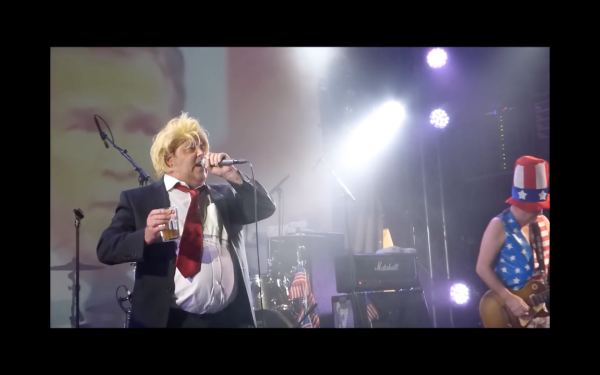 British Punk Singer Who Impersonated President Trump Denied Entry to U.S. Due to Visa Problem
Next Up: Editor's Pick