This Is the First-Ever Photo of a Total Solar Eclipse

Millions of Americans will see a total solar eclipse on Aug. 21, and many of them will point their cameras skyward to capture the celestial event.

But it wasn’t so long ago that a solar eclipse was an even more fleeting phenomenon, experienced only by those who were lucky enough to witness it in person. That changed on July 28, 1851, when the first photo of a total solar eclipse was taken. Johann Julius Friedrich Berkowski, a Prussian known for his ability as a daguerreotypist, captured the image during a total solar eclipse in Königsberg, which is now Kaliningrad, Russia, according to Space.com.

The Royal Prussian Observatory commissioned Berkowski to capture the photo of the eclipse, Space.com reports. Berkowski used the daguerreotype process to create the image, which was “state of the art” back in 1851, according to astrophysicist and eclipse expert Fred Espenak.

The oldest photo of a total eclipse is shown at the observatory of Jena University, Germany, 26 May 2003.
Jan-Peter Kasper—dpa/AP

The process begins with a silver-coated copper plate, which is buffed and polished until it resembles a mirror and is then made light-sensitive with chemicals, according to Space.com. Next, the plate is placed inside the camera and exposed to the scene that the photographer wants to capture. The light from that scene, in this case the moment of the total solar eclipse, leaves behind a hidden image on the copper plate. To make that image visible, it’s treated with mercury vapor in the dark, which removes the plate’s light sensitivity. When the black-and-white image has appeared, the plate is rinsed and framed behind glass. In Berkowski’s day, this process probably took about 15 minutes.

Prior to Berkowski, many photographers tried and failed to capture a perfect image of an eclipse — often failing to show the brilliance of the sun’s corona and the darkness of the moon in a single image.

“The daguerreotype process is very insensitive,” Espenak said in an interview. “Even in bight daylight, proper exposure takes a long time. An eclipse only lasts a couple of minutes and is not really bright, so most images at that time would be blurred.” 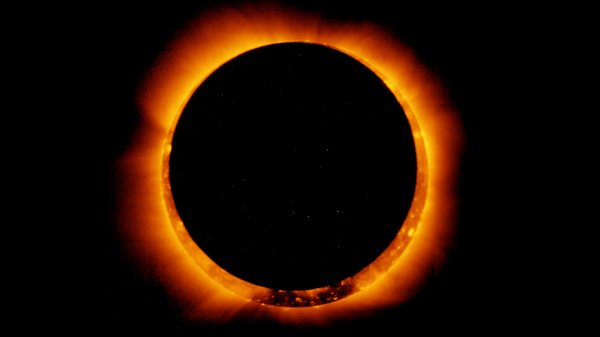 Eclipses Are Happening All the Time. You Just Need to Know Where to Look
Next Up: Editor's Pick