President Donald Trump told the Wall Street Journal that after his controversial speech at the Boy Scouts National Jamboree in West Virginia, the head of the Boy Scouts called him and told him it was “the greatest speech that was ever made to them.” But the organization told TIME they are unaware of any call from national leadership placed to the White House.

“The Chief Scout Executive’s message to the Scouting community speaks for itself,” the organization said, referring to a July 27 statement from Michael Surbaugh, the Chief Scout Executive for the Boy Scouts of America, who apologized to anyone in the scouting community who could have been offended or alarmed by the political rhetoric in the speech.

“For years, people have called upon us to take a position on political issues, and we have steadfastly remained non-partisan and refused to comment on political matters. We sincerely regret that politics were inserted into the Scouting program,” Surbaugh wrote.

The President also told the paper he did not find his politicized speech to the Boy Scouts last month to be controversial, despite Surbaugh’s apology.

“They loved it,” the President told the Wall Street Journal, according to a transcript of the interview obtained and published by Politico. In the transcript, the President is responding to claims from the paper’s reporters that the reaction to his speech was “mixed.”

“I’d be the first to admit mixed. I’m a guy that will tell you mixed,” Trump responded. “There was no mix there. That was a standing ovation from the time I walked out to the time I left, and for five minutes after I had already gone. There was no mix.”

During his July 24 speech, the President bragged about his election victory, slamming his former opponent Hillary Clinton as well his predecessor, former President Barack Obama, and repeatedly decrying the media for what he deemed unfair coverage.

The interview with the Journal took place July 25, but the paper only released excerpts rather than a full transcript. Politico obtained and released the transcript on Tuesday. 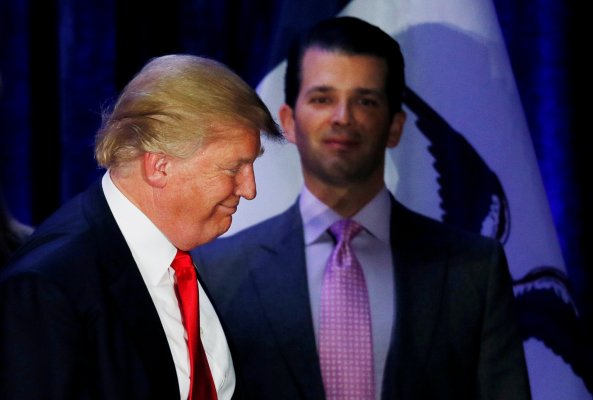 White House: Trump 'Weighed In' on Son's Statement
Next Up: Editor's Pick