Elvis Presley poses for a portrait while playing his acoustic guitar in 1956
Michael Ochs Archives / Getty Images
By Olivia B. Waxman

When Elvis Presley died 40 years ago — on Aug. 16, 1977 — TIME’s music critic Jay Cocks turned to one song to memorialize the king of rock ‘n’ roll: the 1955 tune “Mystery Train,” the lyrics to which began Presley’s obituary. It was one of the last of the early Elvis tunes released before he changed the world with Heartbreak Hotel and launched a new era for American music.

Only about two decades passed between that fateful recording session and the day he was found in his bathroom, on the floor, and could not be revived.

His death struck TIME’s critic as yet another chapter in the same old story about celebrities who die too soon, victims in part of their own success — and of the battle to be everything to everybody. In Elvis’ case, the struggle with being a sex object to his fans and a good Christian to their parents took its toll, as Cocks explained:

But the legend of Elvis, Cocks noted, would continue to grow (and not just because many of his fans and true crime enthusiasts are still coming out with theories about what really happened to him). He had helped to define a generation, and now that generation could go on without him.

Read the full remembrance from 1977, here in the TIME Vault: Last Stop on the Mystery Train 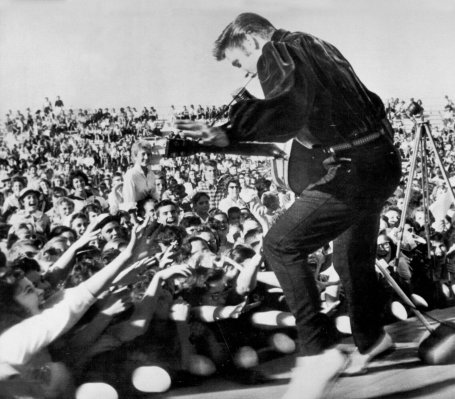 See the Evolution of The King Through Elvis Presley's Life in Pictures
Next Up: Editor's Pick