More than 50 retired generals and admirals from every branch of the U.S. military penned a letter Tuesday condemning President Trump’s upcoming ban of transgender troops.

The 56 officers from the United States Army, Marine Corps, Navy, Air Force and Coast Guard argued that implementing the President’s ban would reduce the readiness of the military, according to the letter sent to the Palm Center obtained by TIME.

“This proposed ban, if implemented, would cause significant disruptions, deprive the military of mission-critical talent, and compromise the integrity of transgender troops who would be forced to live a lie, as well as non-transgender peers who would be forced to choose between reporting their comrades or disobeying policy,” the officers said in the letter. “As a result, the proposed ban would degrade readiness even more than the failed ‘don’t ask, don’t tell’ policy.

“Patriotic transgender Americans who are serving—and who want to serve—must not be dismissed, deprived of medically necessary health care, or forced to compromise their integrity or hide their identity,” the letter added.

Trump announced his plan to bar transgender troops from the military in a series of tweets last week.

“Our military must be focused on decisive and overwhelming victory and cannot be burdened with the tremendous medical costs and disruption that transgender in the military would entail,” he said in the tweets.

A study by independent military research firm RAND Corporation found that medical services for transgender soldiers would amount to, at most, $8.4 million a year — an increase of 0.13% and just 0.005–0.017% of the Defense Department’s total health care budget. 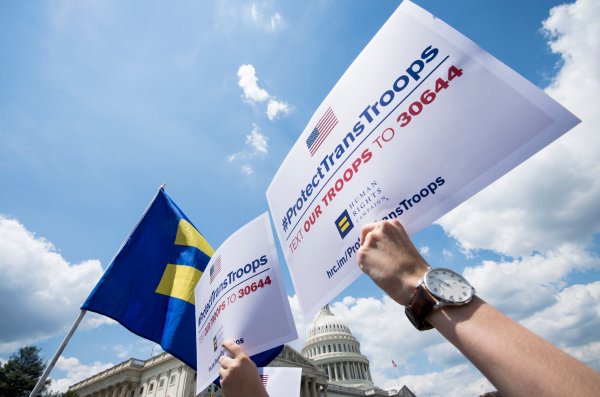 4 Dangerous Myths About the Transgender Military Ban
Next Up: Editor's Pick