This Longshot Bill Would Encourage States to Legalize Marijuana

Legislation unveiled Tuesday from the New Jersey Democrat, who hasn’t ruled out running for president in 2020, would remove cannabis from the federal scheduling system, which currently classifies the substance in the same regulatory class as heroin.

While this would end marijuana’s status as an illegal drug on the federal level, it could still be prohibited on a state or local level. Booker’s bill, called the Marijuana Justice Act, would cut federal money from states with disproportionate marijuana arrest rates for minorities and the poor.

“This is the single most far-reaching marijuana bill that’s ever been filed in either chamber of Congress,” Tom Angell, head of the pro-legalization Marijuana Majority, said in a statement. “More than just getting the federal government out of the way so that states can legalize without DEA harassment, this new proposal goes even further by actually punishing states that have bad marijuana laws.”

Congress is currently under control by Republicans, many of whom adamantly oppose marijuana legalization. In addition, President Trump appointed Attorney General Jeff Sessions, who has made it clear that he intends to ramp up punishment for marijuana possession and use.

But Booker’s legalization bill should be an encouraging sign for advocates. It reflects the country’s changing views on the substance. A CBS News poll in April found that 61% of Americans think marijuana should be legal, 71% think the federal government shouldn’t intervene with states that have legalized it on their own, and 88% support medical use. 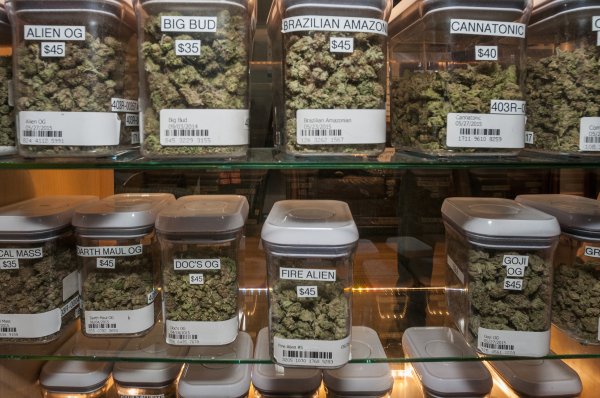 Marijuana Is the New Moneymaker for Wedding Planners
Next Up: Editor's Pick