50 Years Ago This Week: Explaining White Privilege in the 1960s

As Detroit and the nation caught their breath amid 1967’s spate of summertime riots, TIME turned its focus to the people this week’s cover-story headline called “the other 97%.” That number came from an estimate from Whitney M. Young, Jr., executive director of the National Urban League, who told the magazine that no more than 3% of the African-American population applauded — much less actively participated in — that summer’s unrest. But, as Young told the magazine, the feelings of the moderate majority would depend on how white Americans responded to the riots. If authorities decided to retaliate (for example, by cutting funding for programs that supported equality), it would show the 97% that they were in fact being punished because of the color of their skin.

What did Young suggest instead? He was TIME’s chosen face of moderate progress — even though he objected to the term “moderate” — and his Urban League had helped 40,000 unemployed African Americans find work the previous year. So it was no surprise that his suggestions focused on jobs and economic solutions.

Young’s big idea was a “Domestic Marshall Plan” that would put $145 billion over ten years into closing the gap resulting from “three centuries of abuse, humiliation, segregation and bias.” Not incidentally, Young’s explanation of that problem reads today as a succinct summary of one side of what would now be called white privilege: history had left African Americans on less-than-equal footing with whites, he said, so even treating the two groups equally would keep white people ahead of the game.

“The tragedy today is that it should take warfare in the cities to awaken white Americans to the Negro’s dire and manifold needs,” TIME concluded. “It will, of course, be an infinitely greater tragedy for the future if they fail to do so.”

Soldier of fortune: This story in the world news section shines a light on the use of mercenary soldiers in conflicts around the world, and not often on the side of right. The “mercs” were out there, most often in Africa and the Middle East, searching for conflicts in need of hired guns, despite a U.N. resolution that had recently condemned nations that harbored mercs.

Quaker meeting: As delegates from around the world converged in North Carolina for a meeting of global Quakers, the religion section took a look at a tradition that was undergoing a slight but significant change. Though the number of adherents to the Religious Society of Friends had remained roughly steady for about 300 years, Quaker groups had taken a new interest in attracting converts. At a time when much of the world was concerned with what was happening in Vietnam, their peaceful attitude toward the world — though it stopped short of a blanket requirement of pacifism among members — had the potential to meet a spiritual need.

Hush hush: And speaking of religious news…or not. Another change in Christian doctrine this week came from the world of the Trappist monks, who had decided to relax their code of silence in view of the demands of the modern world.

Ms. Clairol: If the name Shirley Polykoff doesn’t mean anything to you, now’s a great time to learn about this “Brooklyn-born mother of two who can write better advertising copy than most men in the game,” as TIME put it back then. She had come up with Clairol’s famous “Does she… or doesn’t she?” campaign and had changed the game for the hair color industry, which was way up since she started. “Shirley Polykoff’s career has risen right along with Bristol-Myers’ sales chart lines. She is now a vice president and associate creative director of Foote, Cone & Belding, supervises a staff of ten, was recently named 1967’s advertising woman of the year,” the story continued. “Widowed since 1961, she lives in a Park Avenue apartment cluttered with paintings and sculpture, steadfastly refuses to disclose her age in spite of a 40-year advertising career. But then, why should she?”

Movie review: A notable new release this week was In the Heat of the Night, which would go on to win Best Picture at the Oscars that year. “No deep solutions are suggested in this subtle and meticulously observed study,” TIME’s reviewer noted. “Yet Director Norman Jewison has used his camera to extract a certain rough-cut beauty from each protagonist. He has shown, furthermore, that men can join hands out of fear and hatred and shape from base emotions something identifiable as a kind of love.”

Great vintage ad: This manufacturer explains to readers what it means that a tape recorder is digital. Bonus: this week’s runner-up is a smaller ad for Campbell’s cream of asparagus soup — “a soup to count on when you’re planning an elegant evening.”

Coming up next week: America’s Cup 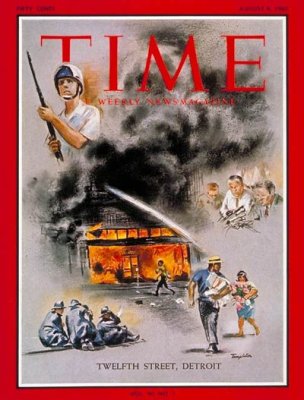 50 Years Ago This Week: Detroit and 'The Fire This Time'
Next Up: Editor's Pick